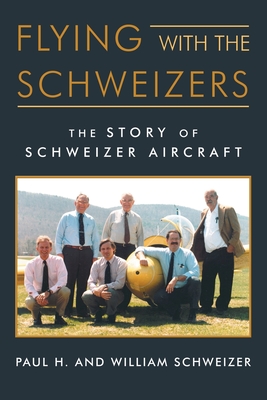 Flying with the Schweizers (Paperback)

The Story of Schweizer Aircraft

The story of Schweizer Aircraft is the story of the American dream. Three brothers became enamored with flight during the golden age of aviation. Aviation becomes their passion. In 1930, they design, build, and then teach themselves to fly in their first glider. They pursue their dream and create a company that eventually produces over six thousand aircraft. The company's products make aviation history. Bill Schweizer tells the story of those early years - up to the transition of the company in 1981 to the second generation of Schweizers. Paul H. Schweizer picks up the story from there. The Schweizers' entrepreneurial approach to business and refusal to let go of their dream resulted in the company becoming an industry leader in sailplanes, agricultural spray aircraft, light helicopters, covert surveillance aircraft, and unmanned vehicles. The diversity of its aviation products made it unique. At the time the business was sold to Sikorsky Aircraft in 2004, Schweizer Aircraft was the oldest privately-owned aircraft manufacturer in the world. It is a remarkable story that will inspire others with a passion and a dream.

William Schweizer was part of the first generation of the Schweizer family that started to make thousands of gliders, airplanes, helicopters, and unmanned vehicles. He was only twelve years old when the first Schweizer glider was built and joined his brothers in the newly formed Schweizer Aircraft Corp. in 1941. He retired in 1981 and continued flying sailplanes into his 1980s. He died at age ninety-eight. Paul H. Schweizer was born into aviation, and at age fourteen, he became a sailplane pilot. By the age of eighteen, he was an experienced contest pilot and a flight instructor. After graduating from Dartmouth College, he joined the Boeing Co. When he joined Schweizer Aircraft, he focused on marketing and finance. He retired in 2009, four years after Sikorsky purchased the company. He splits his time between Arizona and Utah with his wife, Lauren, and remains an active pilot.
or support indie stores by buying on
Copyright © 2020 American Booksellers Association