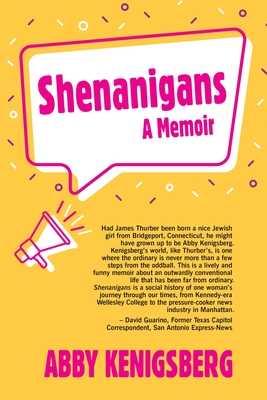 SHENANIGANS is the memoir of a woman who became a successful media watchdog as well as a more sympathetic wife, mother, and daughter. Always surrounded by witty and strong-minded people, especially her supportive, force-of-nature husband, Kenigsberg more than held her own. She pursued a serious career as a media critic and professor and became a respected figure in New York media. Kenigsberg delivers irreverent descriptions of college professors, corporate bigwigs, and never-before-revealed encounters with Dan Rather, Leslie Stahl, Mike Wallace, and Alan King.

Born in 1939, Abby Kenigsberg (nee Bogin) was Founder and Executive Director of the Long Island Coalition for Fair Broadcasting, Inc. from 1979 to 2001. She worked as an Adjunct Professor of Media Arts at Long Island University from 2002 to 2014, is listed in Who's Who in the East (1986-87) and holds an Honorary Degree from St. Joseph's College on Long Island. She lives in Austin, Texas, where she teaches "Critical Reading of the NYTimes."
Loading...
or support indie stores by buying on