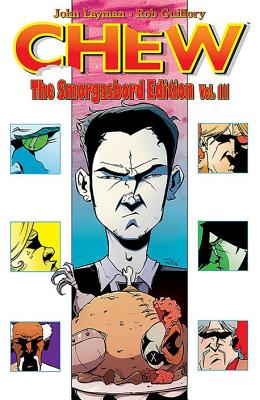 Tony Chu is a detective with a secret. A weird secret. Tony Chu is Cibopathic, which means he gets psychic impressions from whatever he eats. It also means he's a hell of a detective, as long as he doesn't mind nibbling on the corpse of a murder victim to figure out whodunit, and why. He's been brought on by the Special Crimes Division of the FDA, the most powerful law enforcement agency on the planet, to investigate their strangest, sickest, and most bizarre cases.
Presenting the third and final CHEW Smorgasbord, a massive, deluxe hardcover featuring the final 20 issues New York Times Best Selling, Harvey and multiple Eisner Award-winning series about cops, crooks, cooks, cannibals, and clairvoyants. Enemies are confronted, mysteries are solved, and the body count rises, so very, very high.
Also included are the blockbuster one-shots featuring everybody's favorite homicidal rooster, WARRIOR CHICKEN POYO, DEMON CHICKEN POYO, and the dual crossover event, CHEW/REVIVAL and REVIVAL/CHEW.