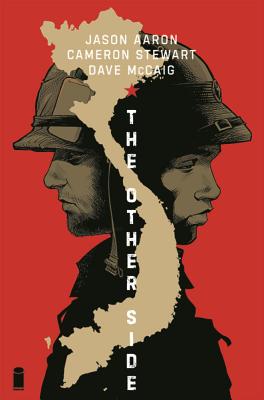 The Other Side Special Edition

THE OTHER SIDE SPECIAL EDITION is a hardcover collection of the Eisner-Award Nominated miniseries that started it all for writer JASON AARON (SOUTHERN BASTARDS, Scalped) With amazingly visceral artwork from CAMERON STEWART (MOTOR CRUSH, Batgirl) and vivid colors from DAVE McCAIG (American Vampire), THE OTHER SIDE tells an unforgettable Vietnam war story from the point-of-view of two young soldiers on both sides of the conflict. Private Bill Everette is a US Marine. His opposite number, Vo Binh is a fighter for the People's Army of Vietnam. These two young men have never met. They are not even aware of each other's existence. And yet, in the battle-scared country of Vietnam, fighting a war that no sane mind can fully comprehend, their destinies are on a deadly collision course. THE OTHER SIDE SPECIAL EDITION will not only showcase this powerful war story but also include loads of extra materials straight from the files of both writer and artist. Cameron Stewart was so committed to this project that he travelled to Vietnam to do preliminary research and this collection will feature pictures, drawings and journal entries from that trip. This definitive collection is an important milestone in the burgeoning careers of two of the most significant creators of modern comics and it's not to be missed Collects THE OTHER SIDE #1-5