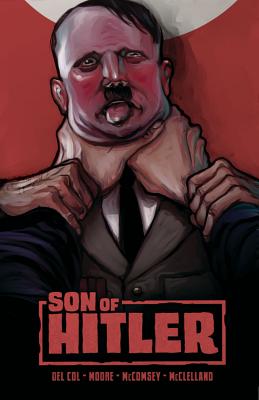 She's a British spy handler who, in the darkest days of World War II, discovers the way to stopping the Nazis is to find a French baker's assistant. Who also happens to be Adolf Hitler's illegitimate son. When a trio of Nazi informants wash up on the shoes of Dover, spy handler Cora Brown is assigned their interrogation. Usually skeptical, she's shocked when they reveal to her a secret only a handful of Nazis know: that during the first World War Hitler fathered a child in France. Armed with these stolen Nazi files, she defies her orders and tracks down Pierre Moreau and convinces him to embark on a mission to find his biological father - and assassinate him. They make their way to Germany but discover that the road to discovery is filled with violence, spycraft, weird scientific experiments and death. Will Pierre make it to Hitler and end the war? Or will they discover something else along the way? SON OF HITLER is an acclaimed graphic novel of which NPR describes, "few war stories are this much fun." If you like pulp spy thriller and alternative history thrillers like Inglourious Basterds, Man in the High Castle and the works of John Le Carre, you'll love this page-turning yarn by acclaimed creators Anthony Del Col (Assassin's Creed), Jeff McComsey (FUBAR) and newcomer Geoff Moore. Buy SON OF HITLER today to discover the greatest untold legend of World War II