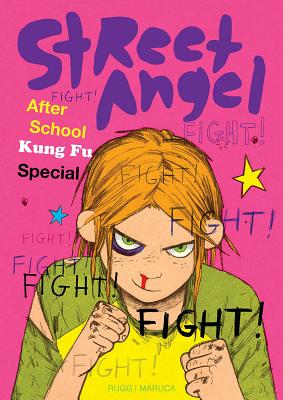 Jesse 'Street Angel' Sanchez is the deadliest girl alive - a teenage homeless orphan skateboarder, fighting ninjas and trying to pass 7th grade She likes food, hanging out with her friends, Bell (a robot girl), Lilith (Satan's daughter), and Emma (a zombie), saving the world, fighting, and food. Jesse "Street Angel" Sanchez takes the Ninja Kid to school Her fists are the facts and his face is the report card Don't miss this very special After School Kung Fu, er, uh...Special? Meanwhile, Saturday night's the big dance and Jesse doesn't want to go Is love in the air? No. STREET ANGEL AFTER SCHOOL KUNG FU SPECIAL centers around Jessica Street Angel Sanchez, who is no stranger to battling forces that you think would be beyond her control. There's still the pesky matter of having a regular life, having to go to school and contend with friends that want her to go to an after school dance. They mean well, but there is another little matter of a showdown with the Ninja Kid to attend to after school that may change things. It's pretty clear that Van Buren Middle School is not ordinary school, but yet there is a very familiar feel to this story. I don't want to spoil any of the details, but you do get to see a couple of different sides to Jessica. After the fight happens (which isn't a spoiler, because it wouldn't be a Kung Fu Special without one), things kind of take a turn from there. What we end up with is something quite unexpected, and yet, should leave you smiling at the end. PRAISE FOR STREET ANGEL AFTER SCHOOL KUNG FU SPECIAL Jesse Sanchez is my new favorite comic book character. Great middle school dialogue and the battle scenes will blow your mind "
-Jeff Smith (Bone, RASL, Tuki) Jesse, a.k.a. Street Angel is a rare gem in the male-dominated world of comic book characters. When you finally find a comic book hero that is female, skateboards, and kicks ass, that's when you know young girls out there now have a strong super hero to follow. STREET ANGEL shows girls that they can be anything they want to be, including someone who saves the world and fights injustices, one bad guy at a time. She also defies female stereotypes right and left, and that is pretty darn cool.
-Cindy Whitehead, founder of Girl is NOT a 4 Letter Word STREET ANGELl remains as charming, inventive, and pitch-perfect as it was in the beginning. An indie-comics classic
-Hope Larson (Compass South, Batgirl) "I thought I didn't like comics about kicking ass, but it turns out I REALLY like comics where the ass-kicker is a 7 year old girl. A+++ more ass-kicking please."
-Eleanor Davis (Libby's Dad, How to Be Happy) With great style and flair, Rugg delivers another stellar story of the ever-sassy Jesse Sanchez a.k.a. Street Angel. Jam-packed with tween angst, humor, action, and fun, this book is a must-read for the rebel set.
-Cecil Castellucci (Shade, the Changing Girl, The PLAIN Janes) "STREET ANGEL pulsates with danger "
-Wendi Freeman, Double Page Spread podcast