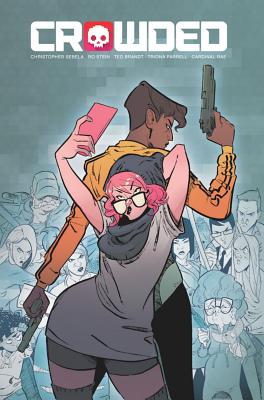 Ten minutes in the future, the world runs on an economy of job shares and apps, while crowdfunding has evolved into Reapr: a platform for assassination that's trickled down from politicians, celebrities and CEOs to everyday life and all its petty resentments. A world where anyone with enough backers and the money they contribute can kill anyone else. Like Charlie Ellison, who up until now has lead a quiet, normal life, until she wakes up to find herself the target of a Reapr campaign with a million dollars on her head. Hunted by all of Los Angeles, Charlie hires Vita, the lowest rated bodyguard on the Dfend app. As the campaign picks up speed and Vita takes out incompetent civilians and aspirational assassins on their tail, she and Charlie will have to figure out who wants Charlie dead and why before the campaign's 30 days or their lives are over. Collecting the first arc by Eisner-nominated writer Christopher Sebela (SHANGHAI RED, WE(L)COME BACK, HEARTTHROB), Ro Stein & Ted Brandt (CAPTAIN MARVEL: RAVEN THE PIRATE PRINCESS), Triona Farrell (RUNAWAYS, MECH CADET YU) and Cardinal Rae (BINGO LOVE, ROSE).