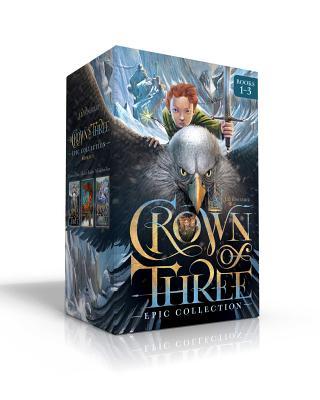 Crown of Three; The Lost Realm; A Kingdom Rises

Family secrets combine with medieval fantasy in this epic tale of battle, magic, strange creatures, power, and fate, in this sweeping middle grade series that Publishers Weekly called “Game of Thrones on a mellow day.”

An ancient prophecy says that when three stars appear in the sky, triplets will take the throne and peace will come to the land. The stars have appeared, and the triplets are Gulph, Tarlan, and Elodie. Can the triplets survive long enough for the prophecy to succeed?

All three books in this magical trilogy are now available together in a collectible boxed set that features:
Crown of Three
The Lost Realm
A Kingdom Rises

"In this action-packed debut, triplets born to an evil king are spirited away at birth so they will survive tofulfill the prophesy that they will overthrow their father and rule the kingdom. . . the ending races to a rousing finish in preparation for the sequel."
— Booklist on Crown of Three (Book 1)

J.D. Rinehart is a pseudonym for author Graham Edwards. When he’s not writing, he can be found exploring castles, watching films, or hiking through the countryside with Sir Galahad, his pet Great Dane. He loves falconry, and once raised a young falcon he found abandoned. He lives in Nottinghamshire, England.
or support indie stores by buying on