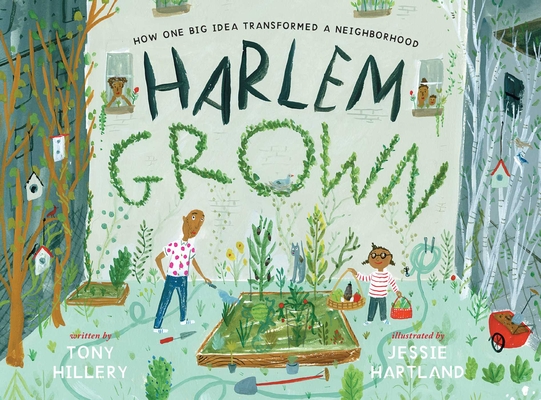 How One Big Idea Transformed a Neighborhood

As featured on Humans of New York

“Hartland’s joyful folk-art illustrations bop from the gray-toned jazzy vibrancy of a bustling city neighborhood to the colorful harvest of a lush urban farm.” —The New York Times
“An inspiring picture book for youngsters with meaningful ties to the environment, sustainability, and community engagement.” —Booklist

​Discover the incredible true story of Harlem Grown, a lush garden in New York City that grew out of an abandoned lot and now feeds a neighborhood.

Once
In a big city called New York
In a bustling neighborhood
There was an empty lot.
Nevaeh called it the haunted garden.

Harlem Grown tells the inspiring true story of how one man made a big difference in a neighborhood. After seeing how restless they were and their lack of healthy food options, Tony Hillery invited students from an underfunded school to turn a vacant lot into a beautiful and functional farm. By getting their hands dirty, these kids turned an abandoned space into something beautiful and useful while learning about healthy, sustainable eating and collaboration.

Five years later, the kids and their parents, with the support of the Harlem Grown staff, grow thousands of pounds of fruits and vegetables a year. All of it is given to the kids and their families. The incredible story is vividly brought to life with Jessie Hartland’s “charmingly busy art” (Booklist) that readers will pore over in search of new details as they revisit this poignant and uplifting tale over and over again.

Harlem Grown is an independent, not-for-profit organization. The author’s share of the proceeds from the sale of this book go directly to Harlem Grown.

Praise For Harlem Grown: How One Big Idea Transformed a Neighborhood…

Hillery, the founder of Harlem Grown, narrates how an urban farm grew from an abandoned lot across the street from Harlem’s PS 175: “Nevaeh called it the haunted garden. It was cluttered with wrecked couches, old TVs, broken bottles, and empty cans.” When “Mr. Tony” visits the school and sees “those kids and that haunted garden,” he gets an idea. Working together, Mr. Tony and the kids clear the lot, bring in clean dirt, and plant. When plants wilt, he says, “We’ll plant something different” and builds raised beds until, finally, “tomatoes, cucumbers, peppers, blueberries, strawberries, collard greens, kale, basil, arugula” grow, and the children share their harvest with their families. Hartland’s gouache illustrations wobble endearingly, colorfully capturing the children’s triumph, and the kinetic energy and colorful vibrancy of the city neighborhood. An author’s note about Harlem Grown and straightforward instructions for how to “start a garden anywhere” conclude. Ages 4–8. (May)
— Publishers Weekly

In his debut children’s book, Hillery creates a visual history of the organization he started, Harlem Grown, which was born after he visited an elementary school and noticed an abandoned, litterfilled lot nearby. Hillery had the idea to initiate an urban gardening project and began to clear the lot and plant seeds with the help of the school children. Gouache illustrations in fitting earth tones carry a childlike look and energy that matches the uplifting story, where hard work (and
teamwork) is deliciously rewarded. This delivers a vibrant tale that is about more than growing plants; Hillery’s vision helped to transform and mobilize the entire community to positively impact the environment. This book delivers on the vision and hopes we all want to instill in children, and it imparts an underlying message that one person can make a big difference. An inspiring picture book for youngsters with meaningful ties to the environment, sustainability, and community engagement.
— Booklist

Ideas plus action yield big rewards is the premise of this debut picture book, written by the founder and executive director of Harlem Grown, a New York City community garden collective. The text offers a historical account of the origins of Hillery’s organization and an inspirational story about working together to meet a community need. Acclaimed illustrator Hartland (Ada Lovelace, Poet of Science) features characters of various ages and ethnicities. Led by Mr. Tony (and inspired by a little girl named Nevaeh), the community members clean an empty lot, prepare the land, and plant fruits and vegetables. The whimsical illustrations, framed by a palette of muted and lush greens and complementary colors, perfectly capture the book’s theme of growth and collaboration. Instructions for starting a garden anywhere and additional resources for children and their families are included. VERDICT A wonderful addition to picture book collections in school and public libraries.
— School Library Journal

While volunteering at P.S. 175, across the street from a trash-filled vacant lot that kids call “the haunted garden,” Hillery (“Mr. Tony”) has an idea. Soon students are helping him clear the lot and plant 400 seedlings, “one for each kid.” Vegetables, herbs, berries, even watermelon. Hartland’s joyful folk-art illustrations bop from the gray-toned jazzy vibrancy of a bustling city neighborhood to the colorful harvest of a lush urban farm. Includes a step-by-step guide to starting a garden “anywhere.”
— The New York Times

Tony Hillery is the founder and executive director of Harlem Grown. In 2011 he began volunteering at a public elementary school in Harlem. It was then that he noticed the vacant lot across from the street and had a big idea. The rest is history. Tony lives in New York, New York. Harlem Grown is his picture book debut.

Jessie Hartland is the author and illustrator many nonfiction titles for young readers, including Our Flag Was Still There, which was named a Bank Street Best Book of the Year. The New York Times praised her “joyful folk-art illustrations” in Harlem Grown, written by Tony Hillery. She has painted murals at a Japanese amusement park, designed Christmas windows for Bloomingdale’s, and put her mark on ceramics, watches, and all sorts of other things. She has done drawings for many magazines and newspapers, including The New York Times, Travel and Leisure Family Club, Martha Stewart Kids, and Bon Appétit. She lives in New York City. Visit her at JessieHartland.com.
Loading...
or support indie stores by buying on