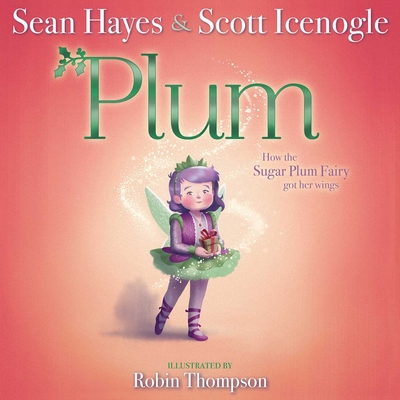 From Will & Grace star Sean Hayes and composer Scott Icenogle comes a modern classic inspired by The Nutcracker about how the Sugar Plum Fairy got her wings.

Plum will not stay glum.

For as long as she can remember, Plum has lived at the Mary Fitzgerald Orphanage, wishing and hoping for a family. When a sudden snowfall threatens a delivery of presents on Christmas Eve, Plum is determined to save Christmas—even for the kids who laugh at her.

Plum’s pure heart grants her an unexpected reward. When she eats a cake left behind by a mysterious magician, she is transported into the Land of Sweets. But Christmas here is threatened, too—by a sourness that is spreading from the center of the land. Plum’s determined to help, and in doing so, she might just find the family she’s always dreamed of, thanks to a good heart—and Christmas magic!

"With a nod to E.T.A. Hoffman’s chestnut The Nutcracker, married debut authors Hayes and Icenogle spin a sweet origin story about one of Hoffman’s favorite characters...Plum." -- Publishers Weekly

Sean Hayes is best known as the award-winning actor who stars as Jack McFarland on Will & Grace. He is also a writer, comedian, and producer. He lives with his husband, Scott Icenogle, in Los Angeles. In addition to his credits in television and film, he has also found success on Broadway. Plum is his first picture book.

Scott Icenogle is a composer and producer who is currently creating music for NBC’s Will & Grace and CNN’s The History of Comedy. A Virginia native and a fanboy of all things fantasy and science fiction, Scott is also a lifelong collector of feature film scores. He now lives with his husband, Sean Hayes, in Los Angeles. Plum is his first picture book.

Robin Thompson hails from Washington, North Carolina, and currently lives in Los Angeles. She attended the Ringling College of Art and Design, where she received a BFA in illustration, specializing in art for animation, sequential art, and book illustration.
Loading...
or support indie stores by buying on