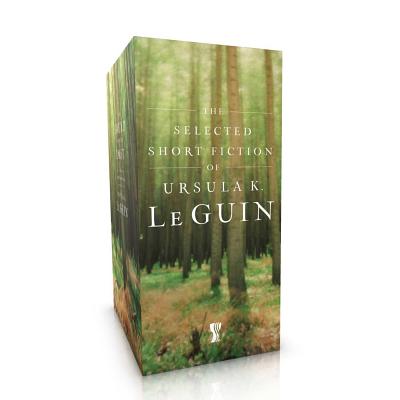 The Found and the Lost; The Unreal and the Real

Combining The Found and the Lost and The Unreal and the Real, this comprehensive boxed set contains many of Ursula K. Le Guin’s award-winning short stories and novellas.

For the first time, the legendary Ursula K. Le Guin's most iconic short stories and novellas have been combined into one boxed set. Coming in at over fourteen hundred pages, this collection is the perfect addition to your bookshelf.

Ursula K. Le Guin (1929-2018) has published twenty-one novels, eleven volumes of short stories, four collections of essays, twelve books for children, six volumes of poetry, and four of translation, and has received the Hugo, Nebula, Endeavor, Locus, Tiptree, Sturgeon, PEN-Malamud, and National Book Award and the Pushcart and Janet Heidinger Kafka prizes, among others. In recent years she has received lifetime achievement awards from World Fantasy Awards, Los Angeles Times, Pacific Northwest Booksellers Association, and Willamette Writers, as well as the Science Fiction and Fantasy Writers of America Grand Master Award and the Library of Congress Living Legends award. Le Guin was the recipient of the Association for Library Service to Children’s May Hill Arbuthnot Honor Lecture Award and the Margaret Edwards Award. Her recent publications include the novel Lavinia, Words Are My Matter, an essay collection, and Finding My Elegy, New and Selected Poems. Her website is UrsulaKLeGuin.com.
Loading...
or
Not Currently Available for Direct Purchase