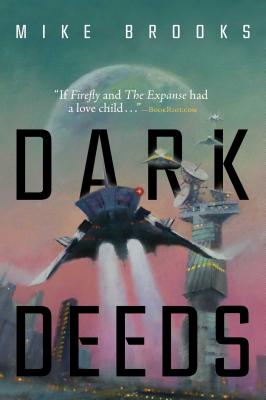 In the third book of the “entertaining” (Kirkus Reveiws) Keiko series, Captain Ichabod Drift and his crew find themselves in another mess as a ship-wide vacation leads to their second-in-command taken hostage by the planet’s criminal mastermind.

After the riotous civil war in Dark Sky, the crew of the Keiko decides to go on vacation at an illegal gambling port for a little fun. What they don’t realize is that the casinos are run by an ex-client who didn’t get his shipment due to the war. The mob boss decides to take Tamara Rouke, the Keiko’s second-in-command, and hold her hostage until the crew raises enough money to pay him back for the lost shipment. If they don’t pay up in time, Rouke will be killed.

Captain Ichabod Drift and his crew agree. But as they find a way to get the funds, one will betray everyone and one will die…

“The bonds among the crew continue to be a high point of the writing, as are Brooks’s terrific action sequences.”
— Publishers Weekly, STARRED REVIEW

Mike Brooks is the author of The God-King Chronicles epic fantasy series, the Keiko series of grimy space-opera novels, and various works for Games Workshop’s Black Library imprint including RITES OF PASSAGE and BRUTAL KUNNIN. He was born in Ipswich, Suffolk, and moved to Nottingham to go to university when he was eighteen, where he still lives with his wife, cats, and snakes. He worked in the homelessness sector for fifteen years before going full-time as an author, plays guitar and sings in a punk band, and DJs wherever anyone will tolerate him. He is queer, and partially deaf (no, that occurred naturally, and a long time before the punk band).
Loading...
or support indie stores by buying on