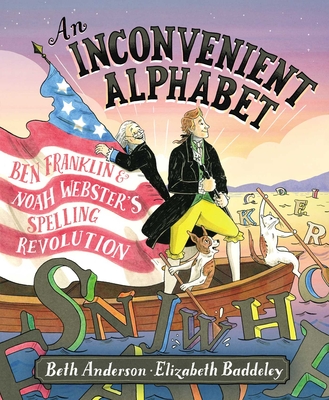 Do you ever wish English was eez-ee-yer to spell? Ben Franklin and Noah Webster did! Debut author Beth Anderson and the New York Times bestselling illustrator of I Dissent, Elizabeth Baddeley, tell the story of two patriots and their attempt to revolutionize the English alphabet.

Once upon a revolutionary time, two great American patriots tried to make life easier. They knew how hard it was to spell words in English. They knew that sounds didn’t match letters. They knew that the problem was an inconvenient English alphabet.

In 1786, Ben Franklin, at age eighty, and Noah Webster, twenty-eight, teamed up. Their goal? Make English easier to read and write. But even for great thinkers, what seems easy can turn out to be hard.

Children today will be delighted to learn that when they “sound out” words, they are doing eg-zakt-lee what Ben and Noah wanted.

Anderson builds on readers’ familiarity with the American Revolution and Benjamin Franklin to deliver a lively account of how Franklin teamed up with Noah Webster to help create an English spelling system unique to people in the United States. There was much trial and error and many failed ideas around creating a new alphabet, with many of the concepts proposed facing strong criticism and outright rejection by the public. It was not until long after Franklin’s death that Webster finally publish his first ever Compendious Dictionary of the English Language. The combination of bold illustrations, humorous anecdotes, and fabulous storytelling makes this true tale anything but boring. It provides a much-needed introduction to the art of spelling and dictionaries while remaining engaging and well paced. Despite discussing wordsmiths from over 200 years ago, Anderson delicately balances Franklin and Webster’s dreams with grade-level appropriate vocabulary and readability. VERDICT The potentially dry topic of American English etymology is transformed into a delightful, relatable, and eye-catchingly illustrated tale that will have readers rooting for the success of the dictionary. Most collections will want to consider.–Emily Beasley, Omaha Public Schools
— School Library Journal

Two Founding Fathers team up for their own miniature revolution—to simplify and standardize American English. Printer Ben Franklin couldn't stand inconsistent spelling. He wanted to invent some new and remove some old letters to create a phonetic alphabet. Noah Webster also couldn't stand our inconsistent alphabet. He wanted to create a guide to grammar and pronunciation. Both wanted to change the way that Americans used English: "Using twenty-six letters to write forty-four sounds caused nothing but trouble." The two visionaries teamed up to tackle the problem of the "inconvenient alphabet," crafting a new alphabet—one in which letters matched sounds and sounds matched letters. When this idea failed to gain widespread support, Webster came up with new plans, this time to revolutionize spelling. His plans for seemingly simpler spellings were also rejected by the populace, leading Webster to create his best-known work: his dictionary. Both Anderson's text and Baddeley's illustrations are energetic and compelling. The latter playfully elucidate examples of the linguistic nuances discussed, showing (for instance) Webster and Franklin manually taking silent letters out of words such as "walk" and "knock." The majority of illustrated figures are white, although a variety of skin tones are presented in each group illustration. Deelytful and iloominaating for noo and seesuned reeders alyk. (author's and illustrator's notes, quotation sources, bibliography) (Informational picture book. 5-8)
— Kirkus

Anyone learning to read and write English, whether as a first or second language, is struck by the inconsistencies involved. Letters make varying sounds. Spellings have rules that must be memorized. What people may not realize, however, is that Benjamin Franklin and Noah Webster teamed up in the early days of the U.S. to try to simplify such matters. Franklin developed a new alphabet with more specific sounds, while Webster advocated eliminating what he considered "unnecessary extras," such as silent letters. The illustrations, rendered using a mix of traditional and digital media as well as partially hand-lettered text, depict Franklin and Webster going about their business with large, three-dimensional alphabet letters bobbing around them like excited pets. Demonstrating perseverance, Franklin and Webster did not succeed completely in convincing others to adopt their point of view, but they did simplify some spellings, and Webster's dictionary was instrumental in making the language more consistent. An extensive bibliography and notes section details the work behind the scenes to make the book factual as well as entertaining. — Lucinda Whitehurst
— Booklist

Ben Franklin’s attempt to reimagine the English language with completely phonetic spellings and an altered alphabet was one of his more quixotic inventions. Noah Webster also attempted spelling reform, but despite Franklin’s encouragement his efforts were also unsuccessful. This thought-provoking and entertaining exploration of these unsuccessful attempts to change the way we write will raise questions about spelling, American history, and the work of invention. Older students may be inspired to learn more about these colorful historic figures. Amusing illustrations vary from colorful spots to full bleed double page spreads, many of which include speech bubbles. Print-block style letters dance across the pages and interact with a diverse cast of dramatic characters. An extensive author’s note reflects on spelling and the evolution of the English language followed by a note about the research that went into the book. An illustrator’s note explains some of Baddeley’s choices. Bibliography. Source Notes.

Anderson’s debut picture book details the origins of Noah Webster’s first American English dictionary and the struggles of Webster and Benjamin Franklin to help unify the new country through language in the 1780s. After laboring alone to streamline American English, the men meet and agree that the dawn of a new nation should also mean the dawn of a new kind of English for its citizens—one that would allow them to understand one another. “Some spoke like the king of England, others like backwoodsmen, and many barely spoke English at all.” The pair join forces over what proves a near-impossible task. Lighthearted illustrations by Baddeley (I Dissent: Ruth Bader Ginsberg Makes Her Mark) feature large, colorful letters that are juggled, balanced, passed around, and left in a crumpled heap as a befuddled citizenry questions and scorns the men’s proposals. Other touches, such as the changing expressions of the cameos hanging on Webster’s wall, keep the story engaging. With back matter that includes an extensive bibliography, this history succeeds in distilling the sophisticated subject of early American English lexicography into a comprehensible, lively read.
— Publishers Weekly

Beth Anderson, a former English as a Second Language teacher, thinks her students would have appreciated Ben and Noah’s big idea. An Inconvenient Alphabet is her first book. Born and raised in Illinois, she now lives in Colorado. You can visit her at BethAndersonWriter.com.

Elizabeth Baddeley is the illustrator of the critically acclaimed and New York Times bestselling I Dissent: Ruth Bader Ginsberg Makes Her Mark, written by Debbie Levy. She also illustrated A Woman in the House (and Senate): How Women Came to the United States Congress, Broke Down Barriers, and Changed the Country; The Good Fight: The Feuds of the Founding Fathers (and How They Shaped the Nation); and An Inconvenient Alphabet. Elizabeth graduated from the School of Visual Arts in New York City with a degree in illustration and currently lives in Kansas City, Missouri. Learn more at EBaddeley.com.
Loading...
or
Not Currently Available for Direct Purchase