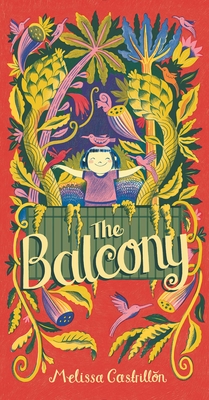 From internationally acclaimed illustrator Melissa Castrillon comes a magical story of how a girl’s garden in her new home changes her life and the lives of people all around her.

When a little girl moves from her home to an apartment in the city, she takes her pretty plants with her and one by one they grow and bloom and change both her world and the world all around her as she makes a new friend. When your heart is open, the world is full of possibilities.

Praise For The Balcony…

The girl who stars in this nearly wordless tale by Castrillón (If I Had a Little Dream) has rosy cheeks and short dark hair and lives blissfully in the countryside. Castrillón’s lush spreads of her house and its surroundings recall early modern woodcuts and traditional folk art. Movement is everywhere: curtains sway, smoke curls. Then the girl’s parents tell her that her mother has gotten a new job and they must move to the city (“Goodbye,” hand-lettered text reads). Their new brick walk-up has a balcony, and from it the girl stares forlornly at the hills where she used to play. But she’s brought a pot with her, in which she plants seeds (“Hope,” the letters read). A large, artichokelike plant soon springs forth, growing by leaps and bounds, and slowly, the girl transforms her balcony into a wild garden. Tendrils and flowers reach the balcony below; neighbors rejoice. She spots a child with dark skin and curly hair across the way, and their families become friends. Castrillón offers riotous sprouting life through soft forms, stylized shapes, and bright colors. “Bloom where you’re planted,” the adage goes, and that’s just what this girl does. Ages 4–8. (Sept.)
— Publishers Weekly

A child gardener makes a new place feel like home.The young protagonist, whose skin is the pale cream of the book's paper, enjoys the lush garden of their country home, serenely having tea with animal friends. Then a job change for their parents means goodbye. Saddened, they move to an apartment in the city, from which they gaze longingly at the distant country from their third-story balcony. They plant seeds in a pot, and, seemingly overnight, an asparagus-looking bloom sprouts. It grows steadily, eventually becoming even taller than the child's parents. With more plants, the balcony soon becomes an overflowing oasis of flora, attracting friendly animals, until the whole neighborhood is teeming with vegetation. The plants form connections among the community, including the protagonist's friendship with a next-door-neighbor child who has dark skin and wears their hair in braided knots. The occasional text provides some plot developments (a posted letter inviting the mother to take a job in the city) and conveys strong moods ("Hope" appears next to the child as they pot their initial plant). Digitally colored pencil illustrations are classically styled, with hatchings, strong lines, playful spatial distortions reminiscent of Wanda Gág, and a vintage-feeling tri-color palette. The organic elements have especially enchanting forms. Elegant drawings and sparse, emotive text make this story accessible to readers of a wide age range .A charmingly verdant tale in classic style. (Picture book. 4-8)
— Kirkus

PreS-Gr 2–A young girl brings along her love of the outdoors as she makes the adjustment of moving from a country home to a city apartment in this mostly wordless attestation to the possibilities of change and the meaning of home. When her mother receives a great job offer in the city, a girl is heartbroken to leave her home’s lush garden where she has found solace with the flora and fauna, only to move to an apartment where the main access to the outdoors is a small, barren balcony. Soon, with some seeds she brought with her, she starts a balcony garden that quickly flourishes, spilling over to the balconies below hers. While enjoying her garden, she meets a friend, which leads to a satisfying realization that home can be a lot of things. With only a few elegantly hand lettered words, Castrillón’s richly hued digital and pencil Ottoman-style illustrations carry the story. Making use of the book’s narrow shape, she moves back and forth between spreads and vignettes that add pacing and offer moments to pause and bask in the splendor of the magical world the girl is creating. Centered on the child’s story, other story lines unfold in the background, reinforcing the book’s theme of hope in change. VERDICT A book to assuage the fear of moving to a new home, this lovely illustrated tale will be a delightful addition to most collections.–Danielle Jones, Multnomah County Library, OR
— School Library Journal