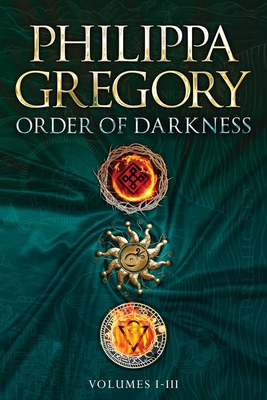 Dark myths, medieval secrets, intrigue, and romance populate the pages of the first three books in the Order of Darkness series from the #1 New York Times bestselling author of The Other Boleyn Girl—now available in one glittering paperback edition.

In Changeling, the year is 1453 and all signs point to it being the end of the world. Forced to face the greatest fears of the dark ages—witchcraft, werewolves, madness—seventeen-year-olds Luca and Isolde embark on a search for truth, their own destinies, and even love as they take the unknown ways to the real historical figure who defends the boundaries of Christendom and holds the secrets of the Order of Darkness.

And in Stormbringer, as Luca and Isolde continue their journey, their attraction grows with each passing day. Even as they try to remain focused on the mysteries they’ve been ordered to investigate, the tension between them builds. Then their budding, forbidden relationship is put on hold when a boy, Johann, and his army of children arrive in town. Johann claims to have divine orders to lead the children across Europe to the Holy Land, and the townspeople readily accept his claims. And when Johann’s prophecy begins to come true, Luca wonders if they have finally stumbled upon a real miracle.

In Fool’s Gold, Luca and Isolde travel to Venice to expose a counterfeiting ring. But when Luca starts to investigate the original charge, the counterfeiter’s true goal is revealed—he plans to create the Philosopher’s Stone, a mystical substance said to be capable of turning base metals into gold and producing the elixir of life. All the evidence suggests that he succeeded in his task. But as Luca and Isolde get closer to the truth, they discover that reality may be more sinister than they ever could have imagined.

Philippa Gregory is the author of many New York Times bestselling novels, including The Other Boleyn Girl, and is a recognized authority on women’s history. Many of her works have been adapted for the screen including The Other Boleyn Girl. She graduated from the University of Sussex and received a PhD from the University of Edinburgh, where she is a Regent. She holds honorary degrees from Teesside University and the University of Sussex. She is a fellow of the Universities of Sussex and Cardiff and was awarded the 2016 Harrogate Festival Award for Contribution to Historical Fiction. She is an honorary research fellow at Birkbeck, University of London. She founded Gardens for the Gambia, a charity to dig wells in poor rural schools in The Gambia, and has provided nearly 200 wells. She welcomes visitors to her website PhilippaGregory.com.
or support indie stores by buying on
Copyright © 2020 American Booksellers Association