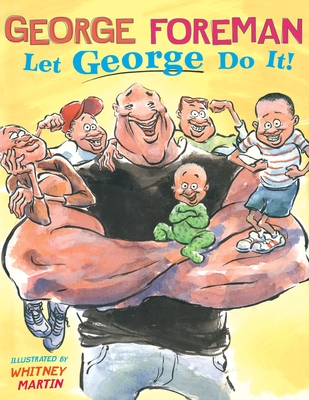 Let George Do It! (Paperback)

George Foreman is a two-time former heavyweight champion of the world, an Olympic gold medalist, a revolutionary in the grilling industry, and an ordained minister, in addition to being a best-selling author. He lives in Houston, Texas, where he founded the George Foreman Youth and Community Center.

Fran Manushkin is the author of many books for young readers, among them the Katie Woo series and the Pedro series; Baby, Come Out!; Happy in Our Skin; The Tushy Book; Big Girl Panties; and Big Boy Underpants. Born and raised in Chicago, Fran lives in New York City, where she enjoys reading, book collecting, bird watching, cat watching, and going to the movies and theatre.

Whitney Martin is the illustrator of George Foreman's picture book, Let George Do It! He has spent the last ten years working in animation for Disney feature films and Fox TV's King of the Hill. Whitney's illustrations have been featured in magazines, galleries, and cable television shows. He lives in Santa Fe, New Mexico, with his wife and two sons.
or
Not Currently Available for Direct Purchase
Copyright © 2020 American Booksellers Association