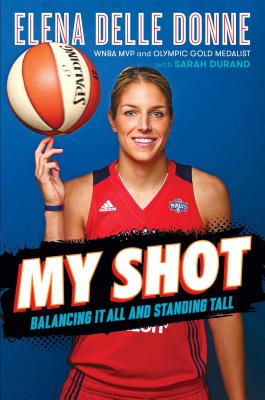 Balancing It All and Standing Tall

Elena Delle Donne, 2015 WNBA MVP and 2016 Olympic gold medalist, shares her inspirational story of being a young basketball prodigy who gave up an impressive basketball scholarship for family and self-discovery.

Elena Delle Donne has always forged her own path. During her first year of college, she walked away from a scholarship and chance to play for Geno Aurriema at UConn—the most prestigious women’s college basketball program—so she could stay in her home state of Delaware and be close to her older sister, Lizzie, who has several disabilities and can only communicate through hand-over-hand signing.

Burned out and questioning her passion for basketball, she attended the University of Delaware and took up volleyball for a year. Eventually she found her way back to her first love, playing basketball for the Blue Hens, ultimately leading them, a mid-major team, to the Sweet Sixteen. She went on to become the second overall selection during the 2013 WNBA draft and the WNBA’s 2015 MVP.

Elena Delle Donne delivers a powerful and motivational story of overcoming the challenges of competitive sports through balancing hard work and the support of a loving family.

Praise For My Shot: Balancing It All and Standing Tall…

"Inspiring in many ways, this will be meat and potatoes to girls with their own basketball aspirations."
— Kirkus Reviews

"Elena Delle Donne is one of the great role models in sports today. She's a terrific athlete who has written a wonderful book that is riveting, compelling and honest. Elena's story is an inspiration to anyone who loves and plays sports."
— Christine Brennan, USA Today sports columnist, CNN and ABC News commentator, best-selling author

“Elena is one of the brightest stars in our game today and an iconic role model. My Shot reveals not only her competitive spirit, but most importantly her character and commitment to her craft. This relatable story will provide inspiration to young athletes everywhere, regardless of sport.”
— Lisa M. Borders, WNBA President

"Sports lovers, especially girls, will find an encouraging story of a sports celebrity who was able to deal with the challenges that came her way."
— VOYA

“Ahh, I love how candid and real Elena is in this book. No, everything is not perfect and she gives so many wonderful insights on how much pressure we put on ourselves as young women and equally important, how to deal with that pressure in a healthy and positive way.  Because when you lose the idea of making everyone else happy, you begin the joyful process of living life courageously.”
— Julie Foudy, Two-time FIFA World Cup Champion and Olympic Gold Medalist