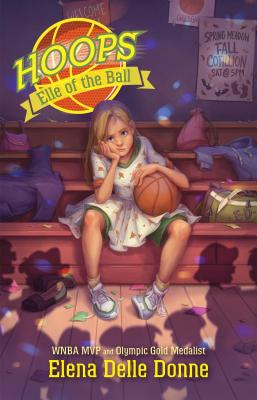 From 2015 WNBA MVP, 2016 Olympic gold medalist, and global ambassador to the Special Olympics Elena Delle Donne comes the first novel in a brand-new middle grade series with as much heart as there is game.

Elle Deluca is a seventh grader who is tall—not just sort of tall. She’s six feet tall. And for a twelve-year-old girl, this means that her basketball team has high hopes for her changing positions and becoming their starting center. But a new position is not the only footwork she has to learn. Her class’s dance unit in gym is coming up, and that means she has to learn ballroom dance steps with a boy much shorter than her—and perform publically for a grade.

In the first book in WNBA MVP and Olympic gold medalist Elena Delle Donne’s Hoops series, Elle must figure out a way to remain herself when others want her to be someone else.

Elena Delle Donne has been a professional women’s basketball player since 2013, when she was selected by the Chicago Sky second overall in the WNBA draft. She was the 2015 WNBA MVP and won the gold medal with the USA’s women’s basketball team in the 2016 Olympics. She is the global ambassador for the Special Olympics and became the first national ambassador for the Lyme Research Alliance. Elena also plays host to De11e Donne Academy, a basketball camp that runs throughout the year, where she mentors and coaches girls ages seven to eighteen. She now plays for the Washington, DC, Mystics.

"Donne humorously portrays Elle’s adjustment to her changing body and her increasing self-confidence and positivity. Play-by-play basketball action, friendship subplots, and the inspiration Elle draws from her older sister (who is deaf and blind and has autism and cerebral palsy) round out this engaging novel."
— Publishers Weekly

"Readers will be eager to see where the rest of the series takes Elle and her teammates... The author’s name may draw some recognition from big WNBA fans, but the diverse cast and timely subject matter for girls in middle grades are what will make this a strong choice for middle grades sports collections."
— School Library Journal
or support indie stores by buying on
Copyright © 2020 American Booksellers Association