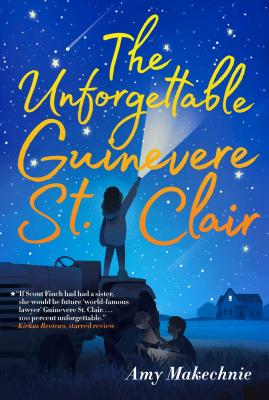 A ten-year-old girl is determined to find her missing neighbor, but the answers lead her to places and people she never expected—and maybe even one she’s been running away from—in this gorgeous debut novel that’s perfect for fans of The Thing About Jellyfish.

Guinevere St. Clair is going to be a lawyer. She was the fastest girl in New York City. She knows everything there is to know about the brain. And now that she’s living in Crow, Iowa, she wants to ride into her first day of school on a cow named Willowdale Princess Deon Dawn.

But Gwyn isn’t in Crow, Iowa, just for royal cows. Her family has moved there, where her parents grew up, in the hopes of jogging her mother Vienna’s memory. Vienna can no longer remember anything past the age of thirteen, not even that she has two young daughters. Gwyn’s father is obsessed with finding out everything he can to help his wife, but Gwyn’s focused on problems that seem a little more within her reach. Like proving that the very strange Gaysie Cutter who lives next door is behind the disappearance of her only friend, Wilbur Truesdale.

Gwyn is sure she can crack the case, but when she does she finds that not all of her investigations lead her to the places she would have expected. In fact they might just lead her to learn about the mother she’s been doing her best to forget…

* "If Scout Finch had had a sister, she would be future "world-famous lawyer" Guinevere St. Clair....With the same nostalgia-tinged humor as Dead End in Norvelt and A Long Way from Chicago, Makechnie's debut will have readers in stitches. Gwyn's voice is distinct and likable, carrying readers through the eventful narrative with ease. Guinevere St. Clair is indeed 100 percent unforgettable."
— Kirkus Reviews - STARRED review

"Spirited and layered...Makechnie's novel is a big-hearted adventure about coming home."
— Publisher's Weekly

* "The smart dialogue and flowing description...highlights the eccentric, yet wholly believable characters. This is part mystery, part study of the human heart, and one pierced with rays of hope. Everyone here, adults and children, have lessons they need to learn, and first-time novelist Makechnie offers them those paths, in startling ways."
— Booklist - Starred Review

Amy Makechnie is the author of the critically acclaimed debut novel, The Unforgettable Guinevere St. Clair. Her second novel, Ten Thousand Tries was written for all the kids, the ones who have ever had the audacity to try and try and try again. Stay in touch with Amy by subscribing to her newsletter at AmyMakechnie.com.
Loading...
or support indie stores by buying on