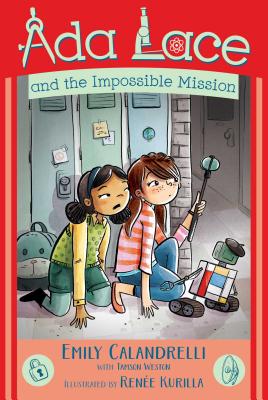 Ada Lace and the Impossible Mission (An Ada Lace Adventure #4)

From Emily Calandrelli—Emmy-nominated host of Xploration Outer Space, correspondent on Bill Nye Saves the World, and graduate of MIT—comes the fourth novel in a fun illustrated chapter book series about an eight-year-old girl with a knack for science, math, and solving mysteries with technology.

Third grader and inventor extraordinaire Ada Lace has a new social studies teacher—who loves group projects. While most of the class has constructed regular dioramas with clay and construction paper, Ada, her best friend Nina, and sometimes nemesis Milton have built a complex scale model of an historic silver mine. But when Milton reveals that he added his “old Milton touch” on their project right before turning it in, Ada worries that he has sabotaged their work.

In a desperate attempt to save their project, Ada and Nina use their combined creative and technical prowess to perform a heist and break into their teacher’s supply closet after school.

Do the two friends have what it takes to deceive the school’s security system? Or will they get caught trying to pull off this seemingly impossible mission?

Emily Calandrelli is an MIT engineer turned Emmy-nominated science TV host. She’s the host and coexecutive producer of Emily’s Wonder Lab on Netflix, featured as a correspondent on Netflix’s Bill Nye Saves the World, and an executive producer and host of Fox’s Xploration Outer Space. Emily is the author of the picture book Reach for the Stars, the science experiment book Stay Curious and Keep Exploring, and the science chapter book series the Ada Lace Adventures. The third book in the series was launched to the International Space Station through the Story Time from Space program. Learn more at TheSpaceGal.com.

Tamson Weston is the author of Hey, Pancakes!, illustrated by Stephen Gammell, and has over fifteen years experience in children’s book publishing. She works as a freelance editor and has edited books by acclaimed authors such as Adam Rex, Mac Barnett, and Dan Santat, among others. She has an MFA in writing and literature and enjoys running, biking, swimming, and lifting heavy things. She lives in Brooklyn, New York. Visit her at TamsonWeston.com.

Renée Kurilla is an illustrator of many books for kids, including Orangutanka: A Story in Poems by Margarita Engle, The Owls of Blossom Wood series by Catherine Coe, and the Ada Lace Adventure series by Emily Calandrelli. She has written a few books as well, including the picture book One Springy, Singy Day and the graphic novel The Flower Garden. She currently lives in Bellingham, Massachusetts, with her illustrator husband Keith Zoo, their six-year-old daughter Zoey, and Yoshi the fish. Visit her at Kurillastration.com.
Loading...
or support indie stores by buying on