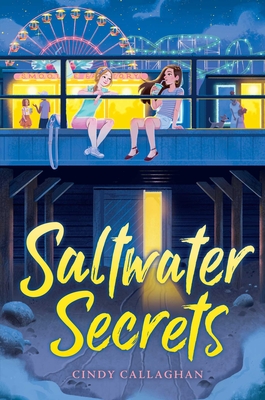 From the acclaimed author of Just Add Magic—now a hit streaming original series—comes a story of two sisters, one summer vacation, and one big mystery for them to solve.

Stella and Josie live for their summers at the boardwalk—each one a carbon copy of the last. Josie lives in Australia most of the year; her half-sister, Stella, lives in New Jersey. But every year, they come together for a beach vacation with their dad, and to make more memories. The real excitement for them is their secret special place under the boardwalk, where they hide their sister scrapbook, adding memories from each summer.

But this summer feels different. Josie isn’t the same—she’s turned into one of the popular girls that Stella can’t stand. Despite the rocky start to their vacation, they still go to their secret, special place under the boardwalk, adding memories to their sister scrapbook once again.

That is, until their place is discovered by the owners of the newest store—the Smoothie Factory, which replaced Josie’s favorite sweet spot. Not only have the owners of the Smoothie Factory discovered the cove, they are exploiting the natural habitat, and endangering marine life and everyone at the beach! It’s up to Josie and Stella to figure out how to stop their beloved boardwalk from disappearing for good.

"Stella would willingly give up some of their childish rituals, but they still hold a strong attraction for Josie. Although this familiar dichotomy could have been the sole focus of the tale, Callaghan adds spice....The bemused, deadpan response of the police detective adds a touch of slightly ironic humor. The bad guys are mildly nasty, and the hint of innocent romance experienced by the characters (all seemingly white) is sure to please preteen readers. Altogether, a fine choice to bring to the beach."
— Kirkus Reviews

This fast-moving story will appeal to young teen and tween readers who enjoy books with an oceanside theme, and its spirited heroines will resonate with those who dream of making a difference in the world.–Anne Jung-Mathews, Plymouth State University, NH
— School Library Journal

Callaghan (Lost in Paris, 2015) tells a story that is part mystery, part family drama, with chapter narration alternating between the two sisters as they chronicle their actions at the boardwalk through an interrogation by the local police. Readers will easily relate to both sisters and be excited by a possible sequel.
— Booklist Online

“Saltwater Secrets is a whirlwind of mystery, friendship, and heart. It’s the perfect summer read that will leave readers feeling empowered!”
— Olivia Sanabia (Just Add Magic, Coop and Cami Save the World)

Saltwater Secrets is an ultra-bingeable read that even the most reluctant readers will devour! The perfect tween beach read for 2020!!
— Julia DeVillers, author of the Ultra Squad series (Justice Studios)