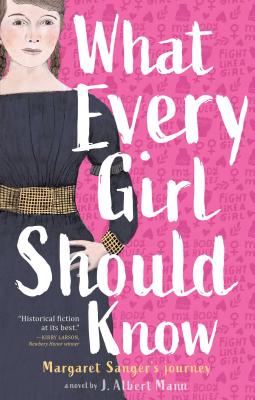 What Every Girl Should Know (Hardcover)

This compelling historical novel spans the early and very formative years of feminist and women’s health activist Margaret Sanger, founder of Planned Parenthood, as she struggles to find her way amidst the harsh realities of poverty.

Margaret was determined to get out. She didn’t want to clean the dirty dishes and soiled diapers that piled up day in and day out in her large family’s small home. She didn’t want to disappoint her ailing mother, who cared tirelessly for an ever-growing number of children despite her incessant cough. And Margaret certainly didn’t want to be labeled a girl of “promise,” destined to become either a teacher or a mother—which seemed to be a woman’s only options.

As a feisty and opinionated young woman, Margaret Higgins Sanger witnessed and experienced incredible hardships, which led to her groundbreaking work as an advocate for women’s rights and the founder of Planned Parenthood. This fiery novel of Margaret’s early life paints the portrait of a young woman with the passion and courage to change the world.

J. Albert Mann is the author of several middle grade and young adult novels, including The Degenerates and What Every Girl Should Know. She has an MFA from Vermont College of Fine Arts in writing for children and young adults. She prefers books with unhappy endings to happy ones. Visit her at JAlbertMann.com.

Praise For What Every Girl Should Know: Margaret Sanger's Journey…

“This is historical fiction at its best: J. Albert Mann braids evocative language and masterfully curated details in this compelling fictionalized account of the life of the young Margaret Higgins Sanger, who grew up to have a profound impact on the lives of so many."
— Kirby Larson, Newbery Honor winner

“A riveting story about one of humanity’s great heroes, with deep resonance for today’s readers.”
— Martha Brockenbrough, author of Alexander Hamilton: Revolutionary

“A moving, authentic portrayal of how the most stubborn and daring woman reformer in American history developed her nerve.”
— Peter C. Engelman, author of A History of the Birth Control Movement in America

“Mann has created a sympathetic character in the rebellious Maggie. . . . An important, readable novel about Sanger, who changed the fate of millions of women through access to contraception.”
— Kirkus Reviews

“Mann's fictional interpretation of the life of Planned Parenthood's founder, Margaret Sanger, offers a thoughtful, topical approach, making the agitator for women's rights an understandable young woman. . . . Mann does well in her portrayal of a family hard-pressed by poverty, and sets up Margaret's struggle with her parents' choices so that it reflects on the concerns she grappled with as an adult. Readers who enjoy historical fiction, and are interested in the women's rights movement's origins, will find this a sympathetic read.”
— Booklist

"It is a tribute to Mann’s narrative approach that a reader who closes the cover without learning why Margaret Sanger is historically important will have seen through Maggie Higgins’ eyes how marriage snuffed out most women’s dreams in families of the working poor, and how even escape took an emotional toll that plucky girl novels too often overlook."
— BCCB

“Mann convincingly depicts Maggie’s fervent emotions as she struggles to be a dutiful daughter and sibling while trying to hold on to her dream of being a doctor, rather than the expected future of becoming a wife, mother, and, possibly, teacher. Mann creates a strong feminist character in her fictional portrayal of Sanger.”
— Publishers Weekly

"Each chapter of this compelling historical novel is poignant and meaningful. . . . Readers will not only be captivated by the storytelling but they will also gain a historical perspective that will shed light on why Margaret Sanger became a champion for women’s and reproductive rights. VERDICT: A fascinating biographical novel about birth control activist and founder of what eventually became Planned Parenthood that belongs on most shelves."
— School Library Journal
or
Not Currently Available for Direct Purchase
Copyright © 2020 American Booksellers Association