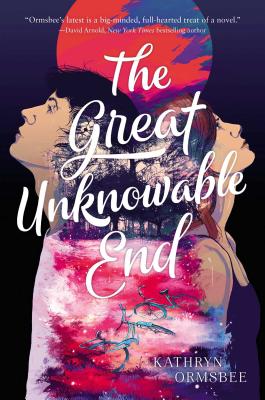 From the author of Tash Hearts Tolstoy comes a funny, moving novel about the lengths we’ll go to make our dreams come true that’s perfect for fans of Shaun David Hutchinson and Rainbow Rowell.

Slater, Kansas, is a small town where not much seems to happen.

Stella dreams of being a space engineer. After Stella’s mom dies by suicide and her brother runs off to Red Sun, the local hippie commune, Stella is forced to bring her dreams down to earth to care for her sister, Jill.

Galliard has only ever known life inside Red Sun. There, people accept his tics, his Tourette’s. But when he’s denied Red Sun’s resident artist role, which he’d believed he was destined for, he starts to imagine a life beyond the gates of the compound...

The day Stella and Galliard meet, there is something in the air in their small town. Literally. So begin weeks of pink lightning, blood red rain, unexplained storms...And a countdown clock appears mysteriously above the town hall. With time ticking down to some great unknowable end they’ll each have to make a choice.

If this is really the end of the world, who do they want to be when they face it?

Praise For The Great Unknowable End…

[On Lucky Few] Ormsbee writes with an occasionally tongue-in-cheek tone that manages to be authentically emotional while delivering a realistic picture of a population that rarely gets much scrutiny in fiction for young adults: home-schoolers. The smart, efficient language features dialogue that pops. A sweet story told with intelligence, humor, and just the right amount of kissing.
— Kirkus Reviews, Starred

[On Lucky Few] Winsome characters, crackling dialogue, and an effortlessly enjoyable writing style help this one stand out in the crowded contemporary YA marketplace.
— Publishers Weekly, Starred

[On Tash Hearts Tolstoy] It’s beyond refreshing to see an asexual character, and the complexities of Tash’s relationships with Thom, her friends, her sister, and, yes, fame make this a home run. The flip, irreverent tone, literary references, and peek into the creation of a web series are just icing on the cake.
— Booklist, Starred

[On Tash Hearts Tolstoy] Ormsbee's. . .cast of characters represents a depth and diversity of sexualities not often featured in teen fiction, including not only a gay and a bisexual character, but a nuanced, trailblazing depiction of a protagonist who identifies as romantic asexual. Whip-smart, funny, flawed, and compassionate, these are characters readers will want to know and cheer for. A clever, thoroughly enjoyable addition to the growing body of diverse teen literature.
— Kirkus Reviews, Starred

Kathryn Ormsbee grew up with a secret garden in her backyard and a spaceship in her basement. She is the author of The Water and the Wild, The Doorway and the Deep, and The House in Poplar Wood and the YA novels Lucky Few, Tash Hearts Tolstoy, The Great Unknowable End, and The Sullivan Sisters. She’s lived in lots of fascinating cities, from Birmingham to London to Seville, but she currently lives in Eugene, Oregon.
or
Not Currently Available for Direct Purchase