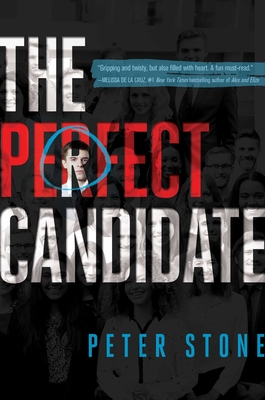 When recent high school graduate Cameron Carter lands an internship with Congressman Billy Beck in Washington, DC, he thinks it is his ticket out of small town captivity. What he lacks in connections and Beltway polish he makes up in smarts, and he soon finds a friend and mentor in fellow staffer Ariel Lancaster.

That is, until she winds up dead.

As rumors and accusations about her death fly around Capitol Hill, Cameron’s low profile makes him the perfect candidate for an FBI investigation that he wants no part of. Before he knows it—and with his family’s future at stake—he discovers DC’s darkest secrets as he races to expose a deadly conspiracy.

If it doesn’t get him killed first.

Praise For The Perfect Candidate…

"An enthralling plot of power, greed, and murder... Stone has crafted a narrative driven by that most potent of fuels: political intrigue."
— Kirkus Reviews

"Stone has created a YA version of the TV show Scandal, and it is just as addictive."
— Publishers Weekly

An inside look at DC politics and landmarks, some laughs, some love, and a killer ending make this debut novel lots of fun. A must-have where political thrillers are in demand.
— School Library Journal

"A wonderfully orchestrated political thriller, trading in the tropes of the genre while still having enough twists and turns to evade predictability... readers looking for a story steeped in political intrigue and DC insider knowledge would be hard-pressed to find a better book for it."
— TeenReads

Unlike many mysteries of this type, Stone maintains suspense.
— BCCB

Stone's debut novel will... engage readers looking for a politically charged, high-stakes thriller with a hint of romance.
— Booklist

Peter Stone is a lifelong fan of thrillers on the big screen, small screen, and page. Prior to his career in TV and film marketing, he worked in Washington, DC, first as an intern on Capitol Hill and later as a Spanish tutor for a former Speaker of the House. The Perfect Candidate is his debut novel. He lives in Tokyo, Japan, with his wife and two sons.
Loading...
or support indie stores by buying on