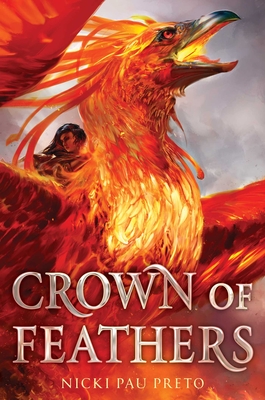 Queen Nefyra was the first in a long line of Rider Queens, women who walked through fire and emerged to ride the great phoenixes. Hundreds of years later, with Riders called rebels and phoenixes almost never seen, Veronyka has only one dream: to become a Rider. Her sister Val had once wanted the same thing, but a great betrayal has split the siblings apart. Veronyka seeks out the hidden Riders, dressing as a boy named Nyk to infiltrate their training program. Meanwhile, Val lurks in the shadows, and her return could ruin everything as the two mage sisters relive the great war that left their world divided. Also included in this story are enslaved Sev and apprentice Rider Tristan, who are both connected to the legendary phoenixes in strange ways. Interspersed between alternating chapters are pieces of scripture about Nefyra and the history of phoenix riders. This is a new twist on fantasy favorites, and Pau Preto’s first novel is as ambitious as it is lyrical. — Stacey Comfort
— Booklist

Gr 7 Up–Phoenix Riders are the warriors and heroes who defend their kingdom with the help of phoenixes. When a war between two sisters rips their kingdom apart, the Riders are hunted and phoenix eggs become scarce. Veronyka dreams of being a Phoenix Rider and even begins to bond with a newly hatched phoenix until her sister, in an attempt to control Veronyka, kills the legendary bird. Disguised as a boy named Nyk, Veronyka leaves her home and joins the remaining Riders, caring for animals and helping the local commander’s handsome son Tristan train with his phoenix for battle. Just as Veronyka feels like she’s made a place for herself, her sister appears and things get complicated in the web of lies surrounding them. In the midst of this sticky situation, the army finds the Riders and marches to destroy their stronghold. The novel begins a little slowly as world-building develops, but it soon becomes an action-packed adventure that will leave fans of epic fantasies eager to find out more. The ending is the perfect setup for a sequel. VERDICT Recommended for fantasy shelves.–Terri Lent, Patrick Henry High School, Ashland, VA
— School Library Journal

Veronyka has always dreamed of becoming one of the fierce Phoenix Riders—warriors who once defended the Golden Empire but have since been banned. Desperate to join the now all-male Riders, she breaks away from the control of her manipulative sister, Val, and disguises herself as a boy to join the secret group outside the fringes of the empire. There she finds allies in the Commander’s son, Tristan, and later Sev, an empire soldier on the other side, and all three viewpoints are interlaced with bits of history, mythology, and phoenix biology that breathe life into the tale. The characters are well developed and the cast is unusually strong on representation, with broad racial diversity (Veronyka’s brown skin is prominently noted) and a same-sex romance (plus the possibility that Tristan is attracted to Veronyka in her male guise). The novel reflects its phoenix motif in the theme of rebirth that symbolically impacts each of the characters as they remake themselves into stronger people. The well-paced plot is chock-full of shocking revelations, betrayals, and moments of empowerment in the face of adversity that give this novel an epic scope and set up the beginning of a promising book series. A glossary and timeline help readers keep track of the intricate world building.
— BCCB