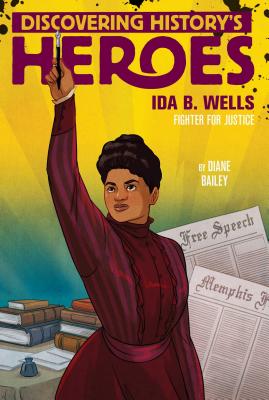 Jeter Publishing presents a brand-new series that celebrates men and women who altered the course of history but may not be as well-known as their counterparts.

Ida B. Wells was an African-American journalist and activist who led an anti-lynching crusade in the United States in the 1890s.

On one fateful train ride from Memphis to Nashville, in May 1884, Wells reached a personal turning point. Having bought a first-class train ticket, she was outraged when the train crew ordered her to move to the car for African Americans. She refused and was forcibly removed from the train—but not before she bit one of the men on the hand. Wells sued the railroad, winning a $500 settlement. However, the decision was later overturned by the Tennessee Supreme Court.

This injustice led Ida B. Wells to pick up a pen to write about issues of race and politics in the South. Using the moniker “Iola,” a number of her articles were published in black newspapers and periodicals. Wells eventually became an owner of the Memphis Free Speech and Headlight, and, later, of the Free Speech.

She even took on the subject of lynching, and in 1898, Wells brought her anti-lynching campaign to the White House, leading a protest in Washington, DC, and calling for President William McKinley to make reforms.

Ida B. Wells never backed down in the fight for justice.

Diane Bailey has written more than fifty nonfiction books for children and young adults. Her most recent titles include books in The Great Outdoors series (Survival Skills, Mountain Biking, Discovering Nature, Water Sports, and Snow Sports), the Black Achievement in Science series (Biology, and Physics), and A First Look at America’s Presidents series (James K. Polk, John Quincy Adams, and William McKinley). She is also a journalist whose work has appeared nationally.

"A fascinating subject and good storytelling combine for a winning text."
— Kirkus Reviews

" The story of Ida B. Wells portrays a strong woman determined to use her talents to fight for justice and who serves as a role model for young readers. This biography would be a good choice for those studying women’s rights, civil rights, slavery, and the period after the Civil War."
— School Library Connection
or support indie stores by buying on
Copyright © 2020 American Booksellers Association