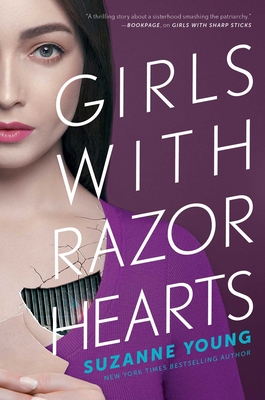 It’s time to fight back in this second novel in a thrilling, subversive near future series from New York Times bestselling author Suzanne Young about a girls-only private high school that is far more than it appears to be.

Make me a girl with a razor heart…

It’s been weeks since Mena and the other girls of Innovations Academy escaped their elite boarding school. Although traumatized by the violence and experimentations that occurred there, Mena quickly discovers that the outside world can be just as unwelcoming and cruel. With no one else to turn to, the girls only have each other—and the revenge-fueled desire to shut down the corporation that imprisoned them.

The girls enroll in Ridgeview Prep, a private school with suspect connections to Innovations, to identify the son of an investor and take down the corporation from the inside. But with pressure from Leandra, who revealed herself to be a double-agent, and Winston Weeks, an academy investor gone rogue, Mena wonders if she and her friends are simply trading one form of control for another. Not to mention the woman who is quite literally invading Mena’s thoughts—a woman with extreme ideas that both frighten and intrigue Mena.

And as the girls fight for freedom from their past—and freedom for the girls still at Innovations—they must also face new questions about their existence…and what it means to be girls with razor hearts.

Suzanne Young is the New York Times bestselling author of The Program series. Originally from Utica, New York, Suzanne moved to Arizona to pursue her dream of not freezing to death. She is a novelist and an English teacher, but not always in that order. Suzanne is also the author of Girls with Sharp Sticks, All in Pieces, Hotel for the Lost, and several others novels for teens. Visit her online at AuthorSuzanneYoung.com or follow her on Instagram at @AuthorSuzanneYoung.

Praise For Girls with Razor Hearts (Girls with Sharp Sticks #2)…

"This book has enough plot twists to give a reader whiplash."
— Cosmopolitan, "Books You Won't Be Able To Put Down in 2019"

"Readers will be revved up for the inevitable uprising . . . a suspenseful and timely read. Readers will look forward to the sequel."
— Kirkus Reviews

"The story presents a clear, overt examination of gender and power, and it’s a carefully constructed one, highlighting the complexities of a patriarchal system that is so ingrained and so absolute that even the most well-intentioned men and women unwittingly uphold it. . . . A timely, perceptive read, this will leave readers, especially those grappling with the implications of the #metoo era, anxious for the sequel."
— BCCB
or
Buy Here
Copyright © 2020 American Booksellers Association