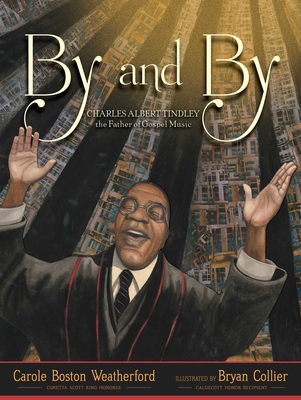 A stirring picture book biography from award-winning duo Carole Boston Weatherford and Bryan Collier, about gospel composer and preacher Charles Albert Tindley, best known for the gospel hymn “We’ll Understand It Better By and By.”

At a time when most African Americans were still enslaved, Charles Tindley was born free. His childhood was far from easy, with backbreaking hours in the fields, and no opportunity to go to school. But the spirituals he heard as he worked made him long to know how to read the Gospel for himself. Late at night, he taught himself to read from scraps of newspapers. From those small scraps, young Charles raised himself to become a founding father of American gospel music whose hymn was the basis for the Civil Rights anthem “We Shall Overcome.”

Told in lilting verse with snippets of spirituals and Tindley’s own hymns woven throughout, Carole Boston Weatherford’s lyrical words and Bryan Collier’s luminous pictures celebrate a man whose music and conviction has inspired countless lives.

Praise For By and By: Charles Albert Tindley, the Father of Gospel Music…

“Weatherford’s couplets thrum like drumbeats, and they’re interwoven with italicized lines from songs (identified in end matter as coming from spirituals that inspired Tindley and hymns he himself wrote). . . . A sonorous readaloud.”
— BCCB

“Weatherford’s first-person, somewhat singsong-y rhyming narrative includes italicized lines from Tindley’s hymns (some of which also appear in the art), further emphasizing the preacher’s foundation in his faith. Collier’s watercolor and collage images beautifully reflect the man’s life and times, from the wide expanse of emerald-hued fields in which Tindley labored as a child and the bright blue sky above, to luminous, larger-than-life portraits of him orating as an adult.”
— The Horn Book

“Weatherford weaves the words of hymns the figure wrote into lines that describe his slow, steady rise . . . until he became pastor of an urban church with 15,000 parishioners and wrote dozens of hymns for them to sing. Collier creates one compelling watercolor and collage spread after another, from a view of the small boy shadowed by tall trees as he trudges to church to congregants joined in song with Tindley at the pulpit. . . . Weatherford artfully champions Tindley’s achievements, and Collier portrays both the man and his life events with memorable visual power.”
— Publishers Weekly