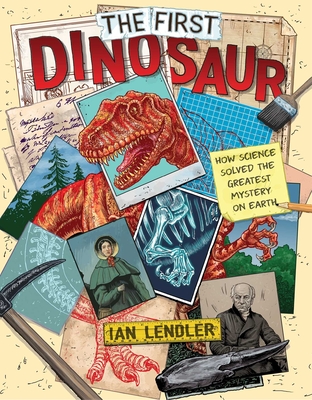 How Science Solved the Greatest Mystery on Earth

Join early scientists as they piece together one of humanity’s greatest puzzles—the fossilized bones of the first dinosaur!

Dinosaurs existed. That’s a fact we accept today. But not so long ago, the concept that these giant creatures could have roamed Earth millions of years before humans was unfathomable. People thought what we know as dinosaur bones were the bones of giant humans. Of large elephants. Of angels, even.

So, how did we get from angel wings to the T-Rex? The First Dinosaur tells the story of the idea of dinosaurs, and the chain of fossil discoveries and advances in science that led to that idea. Be prepared to meet eccentric men and overlooked women who uncovered the pieces to a puzzle so much bigger than themselves, a puzzle far stranger and more spectacular than they could have ever imagined.

Praise For The First Dinosaur: How Science Solved the Greatest Mystery on Earth…

"Vibrant and inviting....Both a dinosaur book and a history book, this is a fascinating narrative history."
— School Library Journal

“Lendler offers a thoroughly engaging history of myriad milestones that were crossed before anyone could believe in dinosaurs’ existence.”
— BCCB

C.M. Butzer was raised in a small town, just outside of Portland, Oregon. In 1992 Butzer left Oregon to attend Cornish College of the Arts in Seattle where he earned a BFA in illustration. After school he worked for Wizards of the Coast. In 1998 he moved to Florence, Italy, where he met Luigi Galante, who ran a didactic illustration studio. He worked for Studio Galante for nearly five years before moving to New York City to earn his MFA in illustration at the School Visual Arts. In 2009 he published Gettysburg, his first graphic novel. He taught “Creating Independent Comics” at SVA and is working on new comics, screenprints, and a myriad of thing drawn and printed. Butzer also works as an illustrator, storyboard, and concept artist out of his studio in Hilo, Hawaii. His work has been featured in the Society of Illustrators, American Library Association, and the Graphic Novel Reporter.
Loading...
or support indie stores by buying on