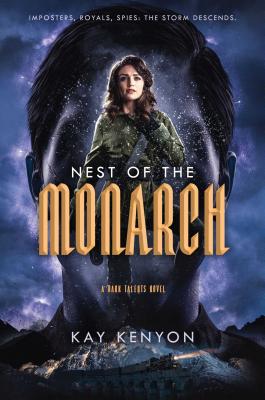 Nest of the Monarch (A Dark Talents Novel)

Kim Tavistock, undercover in Berlin as the wife of a British diplomat, uncovers a massive conspiracy that could change the course of the war—and she’s the only one in position to stop it in the electrifying conclusion to the Dark Talents series.

November, 1936. Kim Tavistock is in Berlin on her first Continental mission for SIS, the British intelligence service. Her cover: a sham marriage to a handsome, ambitious British consul. Kim makes the diplomatic party circuit with him, hobnobbing with Nazi officials, hoping for a spill that will unlock a secret operation called Monarch. Berlin is a glittering city celebrating Germany’s resurgence, but Nazi brutality darkens the lives of many. When Kim befriends Hannah Linz, a member of the Jewish resistance, she sets in motion events that will bring her into the center of a vast conspiracy.

Forging an alliance with Hannah and her partisans, Kim discovers the alarming purpose of Monarch: the creation of a company of enforcers with augmented Talents and strange appetites. Called the Progeny, they have begun to compel citizen obedience with physical and spiritual terror. Soon Kim is swept up in a race to stop the coming deployment of the Progeny into Europe. Aligned against her are forces she could never have foreseen, including the very intelligence service she loves; a Russian woman, the queen of all Talents, who fled the Bolsheviks in 1917; and the ruthless SS officer whose dominance and rare charisma may lead to Kim’s downfall. To stop Monarch and the subversion of Europe, she must do more than use her Talent, wits, and courage. She must step into the abyss of unbounded power, even to the point of annihilation. Does the human race have limits? Kim does not want to know the answer. But it is coming.

Praise For Nest of the Monarch (A Dark Talents Novel)…

"This remarkable fantasy crosses genre borders—pulling in elements of comic books, war thrillers, and historical fiction—to craft an alternate history spy game sure to satisfy just about any genre reader."--
— B&N SciFi & Fantasy Blog, on AT THE TABLE OF WOLVES

Kay Kenyon is the author of fourteen science fiction and fantasy novels as well as numerous short stories. Her work has been shortlisted for the Philip K. Dick and the John W. Campbell Memorial Awards, the Endeavour Award, and twice for the American Library Association Reading List Awards. Her series The Entire and the Rose was hailed by The Washington Post as “a splendid fantasy quest as compelling as anything by Stephen R. Donaldson, Philip Jose Farmer, or yes, J.R.R. Tolkien.” Her novels include Bright of the Sky, A World Too Near, City Without End, Prince of Storms, Maximum Ice (a 2002 Philip K. Dick Award nominee), and The Braided World. Bright of the Sky was among Publishers Weekly’s top 150 books of 2007. She is a founding member of the Write on the River conference in Wenatchee, Washington, where she lives with her husband.
Loading...
or
Not Currently Available for Direct Purchase