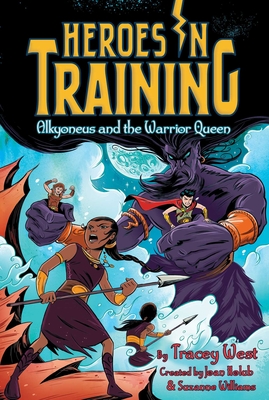 Alkyoneus and the Warrior Queen (Heroes in Training #17)

Zeus and Hercules face a very hungry giant in this latest Heroes in Training chapter book!

Zeus and Hercules may have gotten a scale from the nine-headed hydra, but that isn’t enough for King Eurystheus to forgive Hercules for egging his temple. For their next task, the Oracle Pythia reveals that, to make Eurystheus happy, they have to get the golden belt from the queen of the Amazons—a band of warrior girls.

Although the Amazons are friendly enough, there’s just one problem…they think that boys are stinky! And Hercules hasn’t been great at getting people to like him.

But before they even reach the Amazons, they are caught by the awful giant Alkyoneus. He has seven daughters to feed, and the boys would make for a perfect snack. Can Zeus and Hercules escape his clutches and get the belt in time? Or will they end up in hot water?

Craig Phillips has been creating cover art and drawings for books, comics, and magazines for nearly two decades. He is most at home working on tales about myth and magic. His book Giants, Trolls, Witches, Beasts: Ten Tales from the Deep, Dark Woods is a 200-page graphic novel about just that! When he is not drawing or writing, he likes to swim in the lakes and walk in the forests and mountains of New Zealand. Visit him at CraigPhillipsIllustration.MyPortfolio.com.
Loading...
or support indie stores by buying on