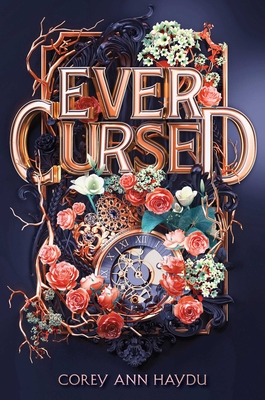 Damsel meets A Heart in a Body in the World in this incisive and lyrical feminist fairy tale about a princess determined to save her sisters from a curse, even if it means allying herself with the very witch who cast it.

The Princesses of Ever are beloved by the kingdom and their father, the King. They are cherished, admired.

Jane, Alice, Nora, Grace, and Eden carry the burden of being punished for a crime they did not commit, or even know about. They are each cursed to be Without one essential thing—the ability to eat, sleep, love, remember, or hope. And their mother, the Queen, is imprisoned, frozen in time in an unbreakable glass box.

But when Eden’s curse sets in on her thirteenth birthday, the princesses are given the opportunity to break the curse, preventing it from becoming a True Spell and dooming the princesses for life. To do this, they must confront the one who cast the spell—Reagan, a young witch who might not be the villain they thought—as well as the wickedness plaguing their own kingdom…and family.

Told through the eyes of Reagan and Jane—the witch and the bewitched—this insightful twist of a fairy tale explores power in a patriarchal kingdom not unlike our own.

Corey Ann Haydu is the author of OCD Love Story, Rules for Stealing Stars, Eventown, and several other critically acclaimed young adult and children’s novels. She currently teaches at the MFA Writing for Children program at Vermont College of Fine Arts and lives in Brooklyn, New York, with her husband and daughter. Learn more at CoreyAnnHaydu.com.

Praise For Ever Cursed…

Five years ago, a powerful witch named Reagan cast a Spell of Without on the Queen of Ever and her five daughters, each of whom succumbs on her 13th birthday.

Jane, the eldest at 17, can’t eat; Nora can’t love; Alice can’t sleep; Grace can’t remember; Eden will soon have no hope; and the queen lies in stasis in a glass box. After Reagan returns from her banishment, she comes to terms with the consequences of her actions, borne of rage, which could destroy the complex balance between witches and royals. She has four days to Undo the spell before her 18th birthday, when it becomes permanent (and for Jane and Alice, deadly). Jane crosses the castle’s moat for the first time (royals must maintain a Royal Distance from their subjects) to gather the objects needed to break the spell, and after learning Reagan’s reasons, Jane must reconsider everything she thought she knew about witches, the people of Ever, and her beloved father. Quirky details enliven Haydu’s magic-infused world, and themes like sexual assault and rampant misogyny are deftly explored while allowing for hope and healing. There are a few surprises, but Haydu doesn’t rely on gimmicky twists: This one is all about compassion, female solidarity, fighting for change, and smashing the patriarchy. Jane’s family and Reagan are white, Alice is trans, Grace is lesbian, and royals, witches, and ordinary citizens are diverse in skin tone.

For the last five years, 17-year-old Princess Jane has been unable to eat due to the Spell of Without. Cast by young witch Reagan, the Slow spell can’t kill Jane, but it has trapped the Queen of Ever in a glass box and withheld love, hope, memory, and sleep, respectively, from Jane’s younger sisters upon their 13th birthdays. With only four days to break the spell before it turns True—and deadly—Jane must join forces with Reagan. But breaking it requires discovering the truth about Jane’s father, the king, and the reason for the inequality between the monarchy and the hungry townspeople. Haydu (Eventown) peppers the novel, told in alternating perspectives by Jane and Reagan, with familiar fairy tale symbols and tropes made fresh through attention to the inventive history of the witches that protect Ever. Affecting scenes showcase the threat of sexual violence that the kingdom’s females face from powerful princes and kings who deem resistors hysterical, and a breathless stream-of-consciousness style echoes the feelings of the two young women contending with Ever’s history, outdated beliefs about princesses and witches, and the way forward in a broken kingdom. Ages 14–up. Agent: Victoria Marini, Irene Goodman. (July)
— Publishers Weekly *STARRED*
or support indie stores by buying on
Copyright © 2020 American Booksellers Association