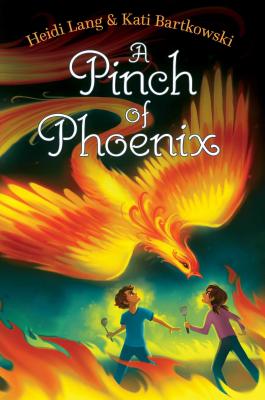 A Pinch of Phoenix (The Mystic Cooking Chronicles) (Hardcover)

With elves waging war on scientists, it’s up to thirteen-year-old master chef Lailu Loganberry to save both her restaurant and her city in this final book in The Mystic Cooking Chronicles, which Kirkus Reviews calls “perfect for Top Chef fans with a penchant for the fantastical.”

Lailu is in hot water. After the events of the Week of Masks, Wren keeps sending insect-like automatons to attack Lailu. However, they’re more irritating than dangerous, and Lailu is more worried about the elves, who have been quiet so far. Too quiet.

When Lailu heads out of the city on a hunt with Greg, the elves finally strike. They put up a magical shield separating the Velvet Forest from the rest of the city. Now no human can enter…and unfortunately for Lailu and Greg, no human can leave, either. Ryon shows up to save them both, claiming they were caught unintentionally, but Lailu isn’t sure she believes him.

Tensions between the elves and the scientists are reaching a boiling point, and the question is which side will snap first. And in the middle of it all is Lailu. Trusted by both sides, she’s selected to deliver messages and help negotiate a truce between the parties before war becomes inevitable.

Easy as pie, right? Not so much. Lailu’s new role as mediator may be one recipe that's headed for disaster!

Kati Bartkowski was originally drawn to illustration before she got swept up in the world of words. Nowadays she’s a fan of creating fantastical creatures and feisty heroines in both mediums. If she’s not reading, writing, or drawing, she’s probably chasing after her high energy little girl. She lives in northern California and is the coauthor of the Mystic Cooking Chronicles and Whispering Pines. Find her on Twitter @KTBartkowski, or visit the website she shares with her writing partner at HeidiandKatiWrite.com.

Praise For A Pinch of Phoenix (The Mystic Cooking Chronicles)…

"Lang’s gripping tale is chock-full of adventure and action."
— School Library Journal on A Hint of Hydra

"solving the magical whodunit and battling against steampunk-inspired automatons easily reinforce Lailu’s heroism and allow for an engaging, self-contained adventure."
— BCCB on A Hint of Hydra
or support indie stores by buying on
Copyright © 2020 American Booksellers Association