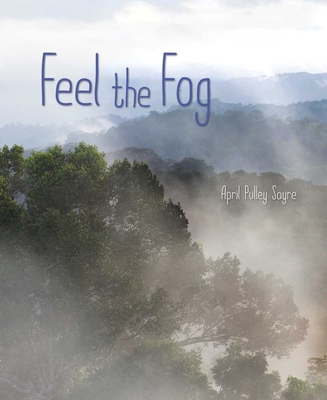 Discover the wonder and science behind fog in this stunning and immersive nonfiction picture book from award-winning author and photographer April Pulley Sayre.

Damp and drippy, misty and mysterious…fog is fascinating. Step inside this natural phenomenon and see how fog is formed, how it clears away, and why it feels chilly. Young readers will love this lyrical and gorgeously photo-illustrated exploration of these clouds that come to visit.

Full-color photographs pair with sparse but poetic text to describe the fog and offer the basic science behind it.

Words set in a spindly typeface called QuickRest appear in different ink colors, contrasting well at all times against full-bleed art. The initial double-spread page says, “Fog rolls in, damp and pale.” That is followed by two coordinated photographs on the next spread: “A cloud, ground level, / hugs stone / and snail.” The text is simple, accessible, and graceful throughout, always with a pleasant rhythm and sometimes rhyming. There is gentle humor, as in an apt reference to the kind of bone-chilling fog that appears to be affecting a hunched-over water bird: “Dewy. Cold stewy.” About halfway in, the text—still maintaining its cadence—switches from sensory descriptions of fog’s presence to elementary explanations of how warm, moist air cools to create fog, presenting examples of environments where that often occurs. The final pages contain a bit more science and plenty more lyricism. The text is complemented artfully with stunning, full-lead photographs from several states in the U.S., as well as the countries of Greenland and Panama. An abundance of natural beauty is seen in every spread: from spider webs to deer; from tide pools to icebergs. Aside from one small shot of birds on a wire, there are no images of people or human-made objects. The effect—whether read silently or aloud—is mesmerizing and reverent. (This book was reviewed digitally with 11-by-18-inch double-page spreads viewed at actual size.)

Immersive photographs (most taken by the author) pull viewers into the experience of a foggy day in Sayre’s latest weather-focused title (Raindrops Roll and others). The large-format pictures invite viewers to explore how weather interacts with animals, plants, and natural landscapes. Sayre’s fog obscures and reveals, with many monochromatic white and gray pages showing just how much the fog can transform outdoor objects and creatures (a yellow bird, for example) and inviting viewers to lean in closely to see what they’re looking at and what may be hidden. But while the pictures steal the show, Sayre’s poetic language creates a mood and a rhythm while leaving plenty of room for listeners to feel like they are making their own discoveries. A back-matter spread succinctly answers many of the questions that children may ask while reading, such as, “Why does fog feel cold?” The book ends by telling readers that fog “limits what you can see, but it can expand what you imagine”—the latter of which could easily describe Sayre’s book.
— The Horn Book Magazine

Some children’s science books explain natural phenomena, while others inspire a sense of wonder. Few combine the two as beautifully as Sayre’s nature books, such as Best in Snow (2016), Full of Fall (2017), or her latest, on fog. “Thicker than mist, / fog can drift, / fog can flow. / Fog forms above / fields of snow. / Fog shifts focus / to near, right here / What do you smell? / What do you hear?” The poetic text works seamlessly with the photos to guide readers through the scenes, while pointing out the distinctive features of fog, such as its movement and the way it affects perception by muffling sounds and dimming colors. In one scene, mottled pale-gray forms fade into white, but gradually the barely discernible forms of birds emerge. The large-format volume showcases Sayre’s riveting photos, whether transporting readers to foggy mountains and forests or focusing attention on droplets of dew condensed on a spider’s web. For curious readers, two appended pages provide clear, succinct explanations of fog, water vapor, condensation, and related topics. From the photos to the poetry to the science, everything about the book is spare, elegant, and accessible to primary-grade children. A beautiful, absorbing science book.
— Booklist, STARRED Review

Readers will learn facts about fog in the back matter, including how it clears, why it feels cold, and how it impacts sight and sound....both the misty background and the skilled writing maintain fog’s mystery. “Fog limits what you can see, but it can expand what you imagine.” [T]his book should be considered for weather studies collections or for language arts lessons in alliteration.
— School Library Journal

April Pulley Sayre (1966–2021) was the award-winning author of more than fifty-five natural science books for children and adults, including her award-winning photo-illustrated books Being Frog, Raindrops Roll, and Best in Snow. Sayre’s books received an abundance of starred reviews, have been dubbed ALA Notable Books (Raindrops Roll; Rah, Rah, Radishes) and won a Geisel Honor (Vulture View). Learn more at AprilSayre.com.

April Pulley Sayre (1966–2021) was the award-winning author of more than fifty-five natural science books for children and adults, including her award-winning photo-illustrated books Being Frog, Raindrops Roll, and Best in Snow. Sayre’s books received an abundance of starred reviews, have been dubbed ALA Notable Books (Raindrops Roll; Rah, Rah, Radishes) and won a Geisel Honor (Vulture View). Learn more at AprilSayre.com.
Loading...
or
Not Currently Available for Direct Purchase