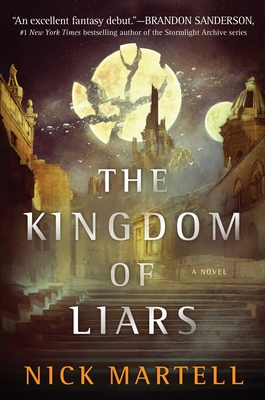 In this brilliant debut fantasy, a story of secrets, rebellion, and murder are shattering the Hollows, where magic costs memory to use, and only the son of the kingdom’s despised traitor holds the truth.

In a world where memory is the coin that pays for magic, Michael knows something is there in the hot white emptiness of his mind. So when the opportunity arrives to get folded back into court, via the most politically dangerous member of the kingdom’s royal council, Michael takes it, desperate to find a way back to his past. He discovers a royal family that is spiraling into a self-serving dictatorship as gun-wielding rebels clash against magically trained militia.

What the truth holds is a set of shocking revelations that will completely change the Hollows, if Michael and his friends and family can survive long enough to see it.

Nick Martell was born in Ontario, Canada, before moving to the United States at age seven. He started writing novels regularly in fifth grade, and his debut novel, The Kingdom of Liars, sold when he was twenty-three years old. Find Nick on Twitter, @MacMartell or at NickMartell.com.
Loading...
or support indie stores by buying on
(This book is on backorder)