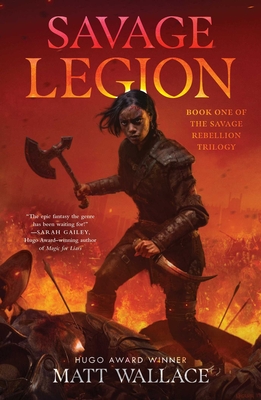 An epic fantasy by Hugo Award–winning author Matt Wallace about a utopian city with a dark secret…and the underdogs who will expose it, or die trying.

“Cunning plotting and brisk action elevate this impressive tale of swords and super-science….it’s rare for anyone in this epic’s expansive cast to remain as they first appear, as Wallace masterfully subverts readers’ expectations. As the plot spins through convincing battlefield combat and personal confrontations,….readers will be left thoroughly satisfied and eager to know what’s to come.” —Publishers Weekly (starred review)

“Smart characters and brutal action create an intriguing story about power and the decisions made to keep it. Wallace introduces a new epic fantasy trilogy filled with rich worldbuilding and people who battle bravely.” —Library Journal (starred review)

“The stylish first book in the Savage Rebellion series promises that Wallace will do for epic fantasy what he did for urban fantasy with the Sin du Jour series.” —Booklist

“Matt Wallace has written a rich multiperspective fantasy; it’s not every day that a brilliant woman with paraplegia who uses a mecha-magical wheelchair offers her voice to a narrative. This is a big, fun book, and anyone seeking a dose of large-scale epic fantasy with some fresh viewpoints will be right at home.” —BookPage

“It will make you think. It will challenge you to analyze the world around you….Just read it. 5 stars.” —FIYAH Literary Magazine

“Stunning….inventive….top notch, pulse pounding, and excellently done….most definitely the best work from the pen of an author whose skills are growing by leaps and bounds.” —Nerds of a Feather, Flock Together

Matt Wallace is the Hugo nominated author of Rencor: Life in Grudge City and the Sin du Jour series, and he won a Hugo Award alongside Mur Lafferty for the fancast Ditch Diggers. He’s also penned more than a hundred short stories in addition to writing for film and television. In his youth, he traveled the world as a professional wrestler and unarmed combat and self-defense instructor before retiring to write full-time. He currently resides in Los Angeles with his wife, Nikki.
Loading...
or
Not Currently Available for Direct Purchase