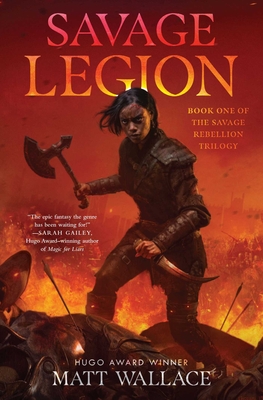 The acclaimed, epic, and spellbinding fantasy by Hugo Award–winning author Matt Wallace, about a utopian city with a dark secret…and the underdogs who will expose it, or die trying.

This remarkable and captivating fantasy will take you on a journey into the heart of brutal battles, dire situations, and odds that seem too high to overcome.

"Smart characters and brutal action create an intriguing story about power and the decisions made to keep it."
— Library Journal, starred review

“Smart characters and brutal action create an intriguing story about power and the decisions made to keep it...filled with rich worldbuilding and people who battle bravely.”
— Library Journal, Starred Review

Matt Wallace is the Hugo nominated author of Rencor: Life in Grudge City and the Sin du Jour series, and he won a Hugo Award alongside Mur Lafferty for the fancast Ditch Diggers. He’s also penned more than a hundred short stories in addition to writing for film and television. In his youth, he traveled the world as a professional wrestler and unarmed combat and self-defense instructor before retiring to write full-time. He currently resides in Los Angeles with his wife, Nikki.
Loading...
or support indie stores by buying on