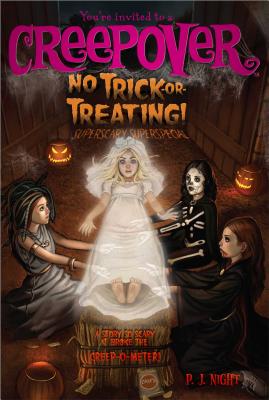 Halloween is more than haunted in this superscary superspecial story in the frighteningly fun You’re Invited to a Creepover series.

When Ashley McDowell’s parents first told her that they were moving from the big city to a one-stoplight farm town, she was convinced that she was going to hate living in Heaton Corners. But to Ashley’s surprise, she loves it. Everyone is super welcoming, especially her new friends. Plus, it’s October and there’s the town’s Harvest Festival, and, of course, Halloween.

But, when Ashley starts making plans for Halloween night, she is shocked to find out that her new friends are forbidden to go trick-or-treating. Ashley convinces them to sleep over at her house and go trick-or-treating anyway, but she soon discovers that Halloween in Heaton Corners isn’t like Halloween anywhere else. For one thing, everything seems so much more real…too real. Ashley can’t help but think that maybe Heaton Corners doesn’t need tricks and disguises to be terrifying on Halloween night…

This exceedingly scary superspecial story features a glow-in-the-dark cover and bursts through Level 5 on the Creep-o-Meter.

A lifelong night owl, P.J. Night often works furiously into the wee hours of the morning, writing down spooky tales and dreaming up new stories of the supernatural and otherworldly. Although P.J.’s whereabouts are unknown at this time, we suspect the author lives in a drafty, old mansion where the floorboards creak when no one is there and the flickering candlelight creates shadows that creep along the walls. We truly wish we could tell you more, but we’ve been sworn to keep P.J.’s identity a secret…and it’s a secret we will take to our graves!
or support indie stores by buying on
Copyright © 2020 American Booksellers Association