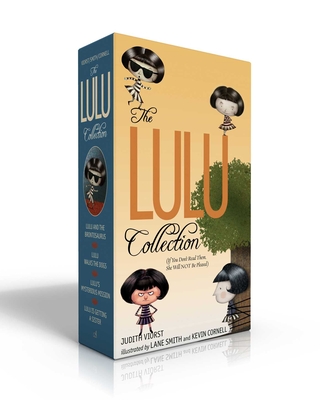 The Lulu Collection (If You Don't Read Them, She Will NOT Be Pleased)

Lulu and the Brontosaurus; Lulu Walks the Dogs; Lulu's Mysterious Mission; Lulu Is Getting a Sister (The Lulu Series)

This hilarious collection includes:
Lulu and the Brontosaurus
Lulu Walks the Dogs
Lulu’s Mysterious Mission
Lulu Is Getting a Sister

Kevin Cornell’s secret spy headquarters are located in Philadelphia. He has successfully accomplished several thrilling missions, including illustrating Mustache! and Count The Monkeys by Mac Barnett, the Chicken Squad series by Doreen Cronin, and the Lulu series by Judith Viorst. Leave a coded message for him at KevSkinRug.com.
Loading...
or support indie stores by buying on