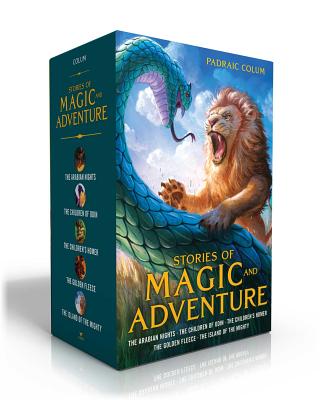 Stories of Magic and Adventure (Paperback)

From Newbery Honoree Padraic Colum comes five captivating retellings of classic mythologies—now available together in a collectible boxed set! Readers of Percy Jackson will love the tales from around the world where genies grant wishes, heroes undertake epic quests, and gods and goddesses wage wars alongside mortals.

The Children’s Homer goes back to ancient Greece, where Achilles fights the Trojan prince Paris, and where Odysseus must survive sea monsters, a beautiful enchantress, and a raging cyclops to return home.

In The Golden Fleece, Jason and the Argonauts undertake a quest to reclaim the throne in a world where Prometheus steals fire from the gods and Zeus wages war against the Titans.

The Children of Odin explores Norse mythology, where dragons and giants roam the realms, Thor defends Asgard with his hammer, and trickster and shapeshifter Loki makes mischief.

In The Arabian Nights, King Shahryar threatens to execute his wife Shahrazad in the morning when she has finished telling him a story. But the clever storyteller saves her life again and again by never finishing her tale before the end of the night, captivating the king with the adventures of Sinbad, Ali Baba, and Aladdin.

In the Celtic tales of The Island of the Mighty, knights and heroes face menacing sorcerers in the land of King Arthur’s court.

Padraic Colum (1881–1972) was a poet, a playwright, and a leader of the Irish Renaissance, but he is best known for his works for children, including The Children of Odin and The Golden Fleece (a Newbery Honor Book).
or
Not Currently Available for Direct Purchase
Copyright © 2020 American Booksellers Association