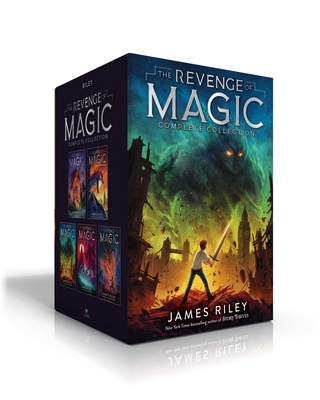 The Revenge of Magic Complete Collection

The Revenge of Magic; The Last Dragon; The Future King; The Timeless One; The Chosen One

Only kids can protect the world from the reawakening of an ancient magic in this series from the New York Times bestselling author of Story Thieves, James Riley! Perfect for fans of The Dark Is Rising and Fablehaven, all five books are now available together in this collectible paperback boxed set.

Thirteen years ago, books of magic were unearthed around the world, buried next to the bones of dragons. But only the children born after Discovery Day have the ability to wield their dangerous power.

But life’s no easier at the school, where secrets abound and Fort sees memories of an expelled student each time he sleeps. And somehow, everything seems connected to legends from King Arthur’s days. Unless Fort can learn the truth about magic and the ancient creatures it unleashed, more attacks will come—and this time, nothing can stop them.

This adventure-filled boxed set includes:
The Revenge of Magic
The Last Dragon
The Future King
The Timeless One
The Chosen One

James Riley lives in Virginia. He is the New York Times bestselling author of the Half Upon a Time, Story Thieves, and Revenge of Magic series.
Loading...
or
Not Currently Available for Direct Purchase