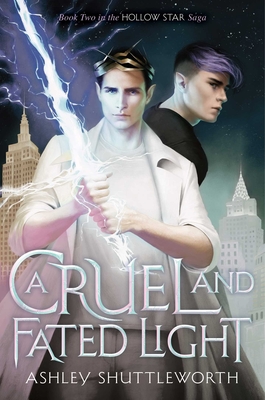 With the Summer Solstice quickly approaching, everyone expects Riadne to finally challenge the High King for his crown. And as Arlo struggles to get control of her powers and take charge of her destiny, she’ll soon be faced with a choice that won’t only change the fate of the Mortal Realm forever but could condemn it to a cruelty the likes of which the Courts have never known.

Praise For A Cruel and Fated Light (Hollow Star Saga #2)…

“A dazzling sequel with enough tantalizing court intrigue, reveals, and secrets to keep you on the edge of your seat. Shuttleworth expertly expands the beautiful and cruel world of the fae with rich world-building and intricate character work in this must-read follow up to A Dark and Hollow Star.”
— Liselle Sambury, author of BLOOD LIKE MAGIC and BLOOD LIKE FATE

"Beautifully written and deliciously complex, A Dark and Hollow Star is utterly engrossing. The magic is bloody, the humor sharp, and the murder mystery drenched in violence and intrigue. Like a fallen Fury set on vengeance, I couldn’t get enough."
— Nicki Pau Preto, author of the Crown of Feathers series

"Characters are vivid, with motivating, sometimes mysterious, backstories. The high stakes of the plot are balanced with humor, particularly from the irreverent and snarky Nausicaä.... Many young adults will love this novel’s stellar queer representation, as well as the oft-repeated refrain that the adults should be the ones handling this mess. VERDICT: A promising opener to an urban faerie fantasy series featuring multiple queer identities."
— School Library Journal on A DARK AND HOLLOW STAR

"Tongue-in-cheek pop-culture references and snarky humor balance well with dark but sensitive portrayals of emotional trauma caused by abusive or negligent adults.... This first in a planned duology should be a hit."

— Booklist Online Exclusive on A DARK AND HOLLOW STAR

Exiled immortals and treacherous fae vie for power and dominance over the mortal world in this second installment of the Hollow Star Saga.

Arlo Jarsdel, an ironborn on the cusp of Maturity, cast aside her fate, claiming the mantle of the Hollow Star to save herself and her friends from the machinations of Hieronymus Aurum, a practitioner of dark magic. Now, with the secret power to manipulate events through a magical 20-sided die, Arlo approaches a crossroads of possibilities. With an invitation from Riadne Lysterne—Seelie Queen of Summer, longtime enemy of Arlo’s family, and mother of her new friend, Prince Vehan—Arlo finds herself thrust into high-stakes political intrigue and has an unprecedented opportunity to learn alchemy. Meanwhile, mysterious evidence suggests that the work of Hieronymus Aurum was only a small part of a much larger plot. Tension and suspense escalate as the chapters alternate between flashbacks and the perspectives of a cast of predominately White, queer characters with conventionally attractive muscular or thin bodies. A trail of clues tightly intertwines the world’s history with the present conflict between the fae courts, ironborn alchemists, and immortals. The exploration of trauma and recovery is as significant as the overarching fantasy plot. Casual, affirming representation of queerness—as well as of the process of questioning sexuality—adds to the high appeal of the fraught, romantic drama. The villain is deliciously ruthless in her charisma and cruelty.

Ashley Shuttleworth is a young adult fantasy author with a degree in English literature and a slight obsession with The Legend of Zelda, Kingdom Hearts, and Final Fantasy. They currently live in Ontario, Canada, with their cat named Zack and a growing collection of cosplay swords. You can find them online at AshleyShuttleworth.com.
Loading...
or support indie stores by buying on