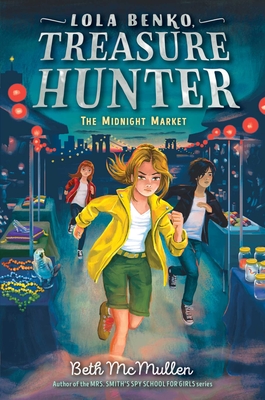 City Spies meets Indiana Jones in this second book of the Lola Benko, Treasure Hunter series that follows Lola and her friends as they compete for a spot in top treasure-hunting society.

After saving her father and the world, twelve-year-old Lola Benko and her new best friends, Jin and Hannah, are a true treasure-hunting team. But after botching a huge job, they are looking to redeem themselves.

They decide to try their luck at Camp Timberwood, where teams will compete to join the legendary Task Force, a group that gets plumb assignments around the globe. When their former nemesis, Lipstick, shows up unexpectedly, she makes an offer they can’t refuse: help her find the legendary Helm of Darkness and she will help them come out on top in the competition—and be the first team in line for the Task Force.

They just have to go to the mysterious Midnight Market, where the Helm is rumored to be. But Lola, Jin, and Hannah still aren’t fully back in sync after their recent failure. Can they prove to the Task Force—and themselves—that they still have what it takes?

To reestablish their friendship and their reputations as treasure hunters, Lola Benko convinces Jin Wu-Rossi and Hannah Hill to join her at summer camp—and on another quest.

After their success reclaiming the Stone of Istenanya in Lola Benko, Treasure Hunter (2020), the three middle schoolers are eager to find the Pegasus necklace. Their overconfidence results in an epic failure to deliver, recounted here with cheek by Lola. Cast out of the treasure-hunting world, the friends drift apart. Anxious to bring the team together again, Lola jumps when her father pulls strings to get the trio into a camp for like-minded explorers—but it takes some doing to get Jin and Hannah to agree to attend. They immediately question their decision when they find Lipstick, their nemesis, is the camp director. She uses them to retrieve the Helm of Darkness while others are trying to off them. Thankfully, some of the villains are dimwits. As the team hurtles around New York City on the hunt, they depend less on STEM skills and more on zany happenstance plus help from brainy, comical Zeus, Lola’s great-aunt’s talking parrot, who stowed away for the trip. It’s the rapport between the friends that provides the real magic in this colorful, ridiculous adventure. The caper closes with a surprise reveal and the promise of more to come. Other than Chinese/Italian Jin, most characters read as White.