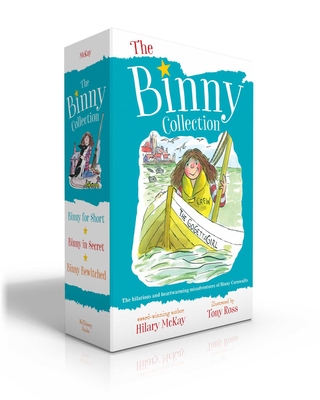 All three of Hilary McKay’s “vivid and lively” (Kirkus Reviews, starred review) books about the misadventures of Binny Cornwallis, together for the first time in one charming paperback boxed set.

Binny Cornwallis’s perfect world is turned upside down after her father dies, when money becomes tight and her horrible aunt gives away her beloved dog, Max. But Binny has the warmth of her busy and loving mother, her musical older sister, and her hilarious little brother, who is always busy with his experiments. And his wetsuit. And his chickens. And she never stops looking for Max.

Life is never dull in the Cornwallis house, and Binny is also faced with crushes, frenemies, new schools, a case of missing chickens, a possible ghost, and a seriously witchy neighbor in this funny and endlessly endearing boxed set.

This set includes: Binny for Short, Binny in Secret, and Binny Bewitched.

Tony Ross has illustrated over 2,000 books that are published all over the world. He has won awards in Holland, Japan, Germany, the United States, France, and the UK. He lives in Rutland, the smallest county in England.
or support indie stores by buying on