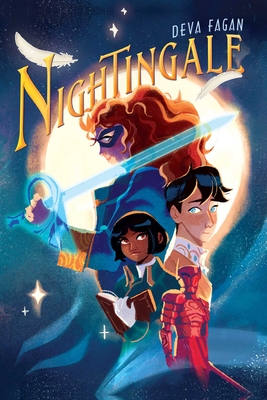 “A solid if unexpected blend of She-Ra and the Princesses of Power and the story of the birth of labor unions…Radium Girls-esque.” —BCCB

​A plucky orphan girl stumbles into a conflict centuries in the making in this thrilling middle grade fantasy about unexpected heroes, the power of friendship, and one boisterous enchanted sword.

Twelve-year-old Lark is determined to escape her squalid life at Miss Starvenger’s boarding house, but she needs to find the coin to do it. Her grand scheme? To steal her fortune from the Royal Museum.

Unfortunately, her heist goes off the rails, and Lark ends up stealing a magical sword right out from under the nose of Prince Jasper, who’s none too happy to have his plans thwarted. Lark soon discovers that the Sword has a mind of its own, and has chosen her to be the next Nightingale, a fabled hero who must vanquish an ancient evil that is waking after centuries of sleep.

Working alone has its limitations, but relying on others after a lifetime of disappointments feels impossible. Still, Lark will need the help of her boarding house roommates if she wants to defeat the villainous forces that threaten to dismantle everything she holds dear.

* "This tale of a reluctant orphan forced to play the hero offers numerous feats of derring-do as well as insight into the importance of making and having friends—not to mention a fine climactic battle with a giant robot. . . . Lark has allies of her own (besides the irrepressible sword), making any victory not only collective but placing the factory in the hands of the workers. Even readers resistant to more liberal agendas will chuckle at the sword’s antics and cheer Lark on."
— Booklist, Starred Review

"Lark’s journey from thief to reluctant hero to champion is a joy to witness. Readers will applaud her realizations of self-worth and recognizing that she does have what it takes. Departing from the quintessential hero story, Lark is not the solitary protagonist who has to save the day on her own, but learns to depend heavily on her friends and the people around her, which offers a valuable lesson on friendship and community. VERDICT From its unique magic system to its diverse cast of engaging characters, this adventure is a worthwhile read."

"A solid if unexpected blend of She-Ra and the Princesses of Power and story of the birth of labor unions, this novel works well with its unique premise, drawing from a Radium Girls-esque exposure to aether that causes hazardous working conditions in the mines. Lark is a naïve and optimistic narrator who goes through extreme character development, and her best friend Sophie . . . is a pillar of information and growth for Lark’s journey. Kids new to workers’ rights and how they function have a great fictionalized example here tied into this 'chosen one' hero story."
— BCCB

"Fagan’s novel is well paced and will hold readers’ attention from the get-go. Lark has gumption and, despite her initial reluctance to assume the role and responsibilities thrust upon her, proves the perfect vessel for sympathetic character growth. Significant inclusion of science fiction and political activism elements complement the action in the book and will serve to appeal to a wide audience. . . . An entertaining, organic, action-packed combination of adventure, science fiction, and fantasy."
— Kirkus Reviews

Deva Fagan writes fantasy and science fiction for kids, teens, and adults. She lives in Maine with her husband and her dog. When she’s not writing, she spends her time reading, doing geometry, playing video games, hiking, and drinking copious amounts of tea. She is the author of Rival Magic, Fortune’s Folly, The Magical Misadventures of Prunella Bogthistle, Circus Galacticus, Nightingale, and The Mirrorwood. You can find her online at DevaFagan.com.
Loading...
or support indie stores by buying on