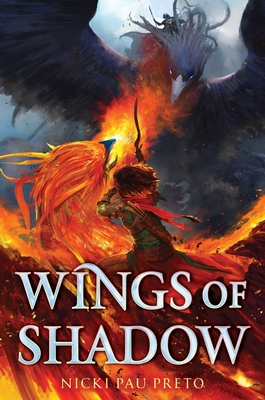 Wings of Shadow (Crown of Feathers)

In the heart-stopping finale to the Crown of Feathers trilogy, which #1 New York Times bestselling author Kendare Blake calls “absolutely unforgettable,” Veronyka must face her most devastating enemy yet: her own sister.

​Veronyka is no longer an orphaned stable boy or a nameless Phoenix Rider apprentice: she is the daughter of Pheronia Ashfire, the last queen of the Golden Empire…and the niece of Avalkyra Ashfire, the resurrected rebel queen who tore the empire apart.

Now that the secret is out, everyone at the Eyrie treats Veronyka differently, and with Tristan still a hostage of the scheming Lord Rolan—and Sev with him as a spy—Veronyka feels very much alone. Except for her beloved phoenix, Xephyra, of course, and her new friend, Kade, who has his own reasons for wanting to save Tristan.

Was it always going to come down to this? Sister against sister? Darkness against light?

Veronyka is determined to do whatever it takes to get Tristan back, even if that means revealing her identity to the world and inheriting a throne she’s not sure she wants. But when she discovers that Avalkyra has bonded with a strix—a legendary creature of darkness that feeds off the life force of others—Veronyka realizes she has more to deal with than an encroaching war with the empire. Val is willing to destroy everything to get her revenge on a world that rejected her, and if Veronyka wants to bring peace to the empire and Pyra alike, she must face down her sister once and for all.

The world began with Ashfire queens…perhaps they will also be its destruction.

Praise For Wings of Shadow (Crown of Feathers)…

"Set in a world of warrior queens and their fierce phoenixes, Nicki Pau Preto's CROWN OF FEATHERS is absolutely unforgettable. It draws you in with the first flaming feather and doesn't let go. Fans of magical creatures, get in line, because I haven't loved a phoenix this much since Dumbledore's Fawkes. This is an instant favorite."
— Kendare Blake, #1 New York Times bestselling author of the Three Dark Crowns series, on CROWN OF FEATHERS

"A fierce and incendiary tale of warrior women, sisterhood, and the choices that define us, all set in a soaring new world that readers will fall in love with. I couldn’t put it down."
— Lisa Maxwell, New York Times bestselling author of the Last Magician series, on CROWN OF FEATHERS

"A beautifully told story about justice, sisterhood, and warrior women. This richly woven world had me turning pages well into the night. Nicki Pau Preto is one to watch!"
— Shea Ernshaw, New York Times bestselling author of THE WICKED DEEP, on CROWN OF FEATHERS

"The unique and imaginative world of the Phoenix Riders had my rapt attention from the first sentence. Nicki Pau Preto is a bright new talent, and I can't wait to read more!"
— Morgan Rhodes, New York Times Bestselling author of the Falling Kingdoms series, on CROWN OF FEATHERS

Crown of Feathers is a feast of magic, action, and romance. An immersive, deeply satisfying fantasy that will stay with you long after the story is finished. Nicki Pau Preto is an author to watch!
— From Elly Blake, New York Times Bestselling author of FROSTBLOOD, on CROWN OF FEATHERS

"This is a new twist on fantasy favorites, and Pau Preto’s first novel is as ambitious as it is lyrical."
— Booklist on CROWN OF FEATHERS

"An action-packed adventure that will leave fans of epic fantasies eager to find out more."
— School Library Journal on CROWN OF FEATHERS

"The well-paced plot is chock-full of shocking revelations, betrayals, and moments of empowerment in the face of adversity that give this novel an epic scope and set up the beginning of a promising book series."
— BCCB on CROWN OF FEATHERS

"Crown of Feathers is epic in the truest sense...it's the perfect series kickoff."
— Quill and Quire on CROWN OF FEATHERS

Nicki Pau Preto is a fantasy author living just outside Toronto—though her dislike of hockey, snow, and geese makes her the worst Canadian in the country. She studied art and art history in university and worked as a graphic designer before becoming a writer full-time. She is the author of the Crown of Feathers trilogy, and you can find her online at NickiPauPreto.com.
Loading...
or support indie stores by buying on