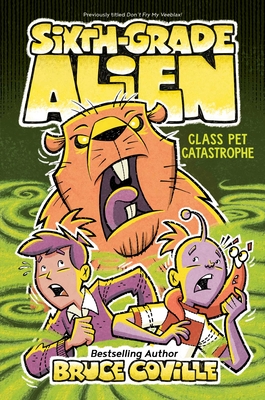 Pleskit’s alien pet causes widespread panic in this sixth book in the hilarious, fast-paced, and accessible sci-fi series Sixth-Grade Alien from the bestselling author of Aliens Ate My Homework and My Teacher Is an Alien, Bruce Coville.

Having a pet shapeshifter might be one of the coolest parts of being from a different planet. So when Jordan accuses Pleskit of lying about his Veeblax’s abilities, Pleskit decides take his pet to class—without asking parental permission.

Bringing the Veeblax to school turns out to be a bigger mistake than Pleskit ever thought possible when it frightens his classmate Misty, causing an intergalactic incident. As the situation spins out of control, it becomes clear that Pleskit may lose his pet, his teacher may lose her job, and Earth may lose the benefits of the alien connection.

Running away may be the only way for Pleskit to save the his pet. But where can you hide when you’re the only purple kid on the planet? Plus, escaping may not be the best idea, because someone—or something—is following him.