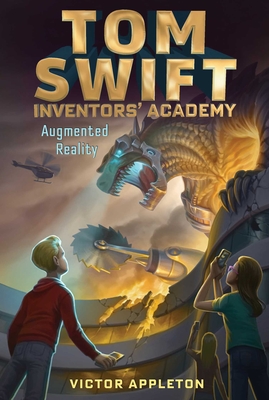 Tom and his friends expose the truth when a friendly rivalry becomes a cutthroat competition in this sixth novel in Tom Swift Inventors’ Academy—perfect for fans of The Hardy Boys or Alex Rider.

To increase interest in Swift Academy, the school’s new PR rep announces the Invention Olympics, an event open to the public that will feature the students’ varied creative talents. Everyone’s excited to show off their latest ideas. But when the rep invites a production company to film a new reality show about the academy, the plan is met with a lot less enthusiasm.

Tom and his friends have mixed reactions to the new attention. Some of them are loving the spotlight, while others want nothing to do with the show, and it’s causing cracks in the group’s rock-solid bonds. But Tom quickly realizes that they aren’t the only ones at school on edge. The reality show producers seem to be pitting students against one another to create more drama for the screen. And as the Invention Olympics approaches, he starts to suspect that the filming may be a cover for something even more nefarious. Can he and his friends figure out the truth before the reality show has real-world consequences?

Victor Appleton is the author of the classic Tom Swift books.
Loading...
or support indie stores by buying on