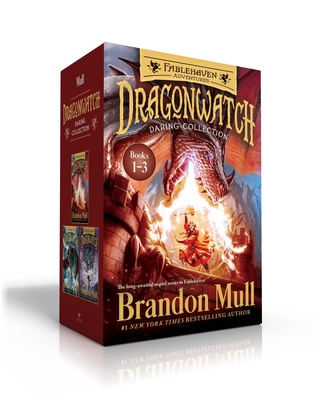 Dragonwatch; Wrath of the Dragon King; Master of the Phantom Isle

The world of Fablehaven returns with this collectible boxed set featuring the first three books in the New York Times bestselling sequel series from Brandon Mull.

In the long-awaited sequel to Fablehaven, the dragons who have been kept at the dragon sanctuaries no longer consider them safe havens, but prisons. And they want their freedom. The dragons are no longer our allies...

In the hidden dragon sanctuary of Wyrmroost, Celebrant the Just, King of the Dragons, plots his revenge. He wants nothing more than to overthrow his captors and return the world to the Age of Dragons, when he and his kind reigned without borders. The time has come to break free and reclaim his power.

What will happen in the epic battles between humans and dragons?

This thrilling boxed set includes:
Dragonwatch
Wrath of the Dragon King
Master of the Phantom Isle

Brandon Mull is the author of the New York Times, USA TODAY, and Wall Street Journal bestselling Beyonders and Fablehaven series, as well as the bestselling Five Kingdoms, Candy Shop Wars, and Dragonwatch series. He resides in Utah, in a happy little valley near the mouth of a canyon. Brandon’s greatest regret is that he has but one life to give for Gondor.
or
Pre-Order Now
Copyright © 2020 American Booksellers Association