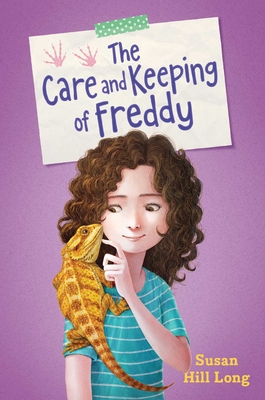 The Care and Keeping of Freddy

For fans of Kate DiCamillo and Sharon Creech comes this sweet and funny middle grade novel about a young girl, her pet bearded dragon, and the friends who make her summer one to remember.

Georgia Weathers’s worry machine has been on full blast since her mom, Blythe, took off in Lyle Lenczycki’s blue sedan. Earlier that same day, Blythe gave Georgia a bearded dragon named Freddy. Georgia is convinced that if she loves Freddy enough, Blythe will come home.

Georgia isn’t the only one with family predicaments. Her friend Maria Garcia’s parents have merrily moved out of the house and into a camper in the yard. Roland Park is the new boy in town. As a kid in the foster care system staying with the Farley family, he’s sure his stay is temporary. When the three friends discover an abandoned glass house in the forest, it becomes their secret hideout: a place all their own, free of parents and problems. But glass can be broken.

When everything around them feels out of their control, the question becomes what can they hold on to? And what do they have to let go? It turns out, there are some things—and lizards—they can count on.

Praise For The Care and Keeping of Freddy…

Georgia is given Freddy, a bearded dragon, as a pet by her mother, Blythe, who abandons her that very same day.

Blythe runs away with her boyfriend, Lyle, leaving Georgia with her quiet, devoted father, Stanley. Georgia, 11, longs for Blythe to return—and makes Freddy a proxy for her mother’s love, vowing to do her best for him. Georgia’s life is further upended when a larger-than-life boy arrives in their small Maine town, a foster child taken in by a highly religious family. Roly’s acquaintance with Georgia and her best friend, Maria, begins after he steals a cat collar from the pet store. Despite witnessing this shocking event, the girls become good friends with him, and the three find a secret refuge in the woods, a glass house that ultimately becomes a danger zone. Strong friendships, parental love (and neglect), and resilient children feature in this slice-of-contemporary-small-town life. Georgia copes with her situation through help from peers and sympathetic adult friends (Maria’s paternal grandmother plays an important role, giving Georgia loving advice). This is a realistic, sometimes humorous, sometimes sad family story; while Blythe has problems with alcohol, both Stanley and Lyle turn out to be good fathers. The book follows a White default for most characters; Maria is Mexican American.

A sincere story of caring and community in the face of family struggles.
— Kirkus Reviews

On the day Georgia Weathers’s mother, Blythe, leaves their small Maine town with an old flame, Blythe buys Georgia a bearded dragon, Freddy. One year and eight months later, now 11-year-old Georgia, who is white, and her best friend Maria Elena Garcia, who is Mexican American, meet Roland Park, a redheaded new arrival in Prospect Harbor. When Roland, a foster child, shoplifts from the pet shop, the girls chase after him, and a friendship is born. And Georgia will need her friends when her mother announces that she, her new husband, and Rosie, Georgia’s baby half sister, are moving back to town. Georgia loves Rosie on first sight, but her plan to shove her stepfather out of the picture and reunite her parents proves difficult as her mother becomes increasingly challenging and requests more of Georgia. Over the course of the summer, Georgia and her friends must lean on one another as they each face different family struggles. Long (Josie Bloom and the Emergency of Life) offers an honest, accessibly written look at family and the challenges of loving people who may prove hurtful, one that’s both raw and warm in its compassionate telling. Ages 8–12. (Oct.)
— Publishers Weekly

Susan Hill Long is the author of Josie Bloom and the Emergency of Life; The Magic Mirror: Concerning a Lonely Princess, a Foundling Girl, a Scheming King, and a Pickpocket Squirrel; The Care and Keeping of Freddy; and Whistle in the Dark, which Publishers Weekly said “sings with graceful recurring motifs, true emotions, and devastating observations about the beauty that can be found in the darkest hours” in a starred review. It was named a best book of the year by Bank Street and Publishers Weekly. Susan lives in Portland, Oregon, with her family. Learn more at SusanHillLong.com.
Loading...
or support indie stores by buying on